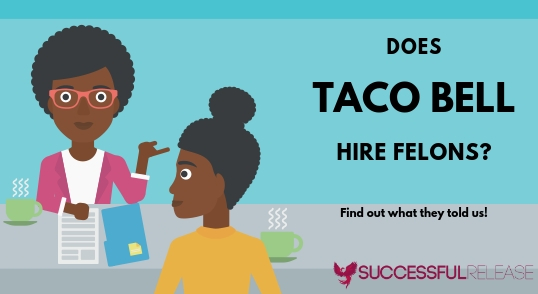 We all know finding a job with a felony conviction is anything but easy. Taco Bell is a well-known fast food chain that always seems to be hiring, but does Taco Bell hire felons?

That’s what we’re here to answer for you. Relaunch Pad goes to the company directly to ask what their hiring policy is for former felons. Unfortunately, we were unable to reach anyone at Taco Bell. We hope to make contact soon, though! In the meantime, we’ve researched them thoroughly to see what we could find.

We’re going to figure out:

Did you know we’re made up primarily of former felons and those who work closely with them? That’s right! That’s why we strive to assist other former felons in the job hunt. We use our experiences to help make the transition back into the workforce as smooth as possible for you and other former offenders.

We were unable to find a specific hiring policy concerning felons in our research. But from looking at Taco Bell’s job postings, it appears their policies differ based on the job applied for.

But how do you get a job at Taco Bell with a felony? Well, let’s continue reading to see what we found.

Has Taco Bell hired felons in the past?

Unfortunately, we were unable to find a direct yes or no to this question.

Is Taco Bell on the Ban the Box list?

Have you ever wished companies didn’t ask about previous convictions on their applications? Well, that is the sole purpose of the Ban the Box campaign. It tries to convince employers to remove all these questions.

Taco Bell is not a company that supports the Ban the Box list.

The Fair Chance Business Pledge is the agreement made by certain companies that have volunteered to commit to fair hiring practices for everyone, including former felons. Unfortunately, Taco Bell doesn’t follow this platform, either.

Always remember: A company doesn’t have to support these initiatives in order to be willing to hire a former felon.

So, does Taco Bell hire felons? Let’s read on to see what we found.

Does Taco Bell have special programs for hiring felons?

Taco Bell doesn’t have programs specifically for individuals with a felony conviction, but they do have a scholarship and GED program for their employees. That’s a pretty cool initiative to have for your employees!

Let’s read on to see how to get a job at Taco Bell with a felony.

The odds of getting hired at Taco Bell with a felony are uncertain. We don’t have enough information to say if they’re for or against hiring people with records, but we believe you have a chance!

Taco Bell has many entry-level jobs to choose from. Let’s take a look at a couple with few requirements:

How to get hired at Taco Bell with a felony

Taco Bells are generally franchises. This means each location is owned by a different person. So, what each store requires for employment may differ.

We always suggest you have a resume ready when you apply. We have an entire section dedicated to helping you highlight any and all skills you have — you can check that out here.

You need a profile on their website in order to fill out an application. They ask you to tell them more about yourself, so this is a good opportunity for you to briefly highlight your skills that pertain to the job you are applying for. They also ask for references. They allow up to three. We suggest you have three professional references, such as a pastor, previous employer, parole/probation officer, or mentor.

Taco Bell has specific requirements and qualifications for certain positions. Some positions will require more responsibilities, so we think that their interviews would vary as well. We know that there will be a few things that will not change, however, such as the importance of customer service and the ability to work with others as a team.

The interview process is a great opportunity to ask any questions you may have. It’s also the time to explain any convictions, if needed. Be professional, and let your personality shine through. Remember, this job includes working with the public, so personality can definitely help you.

Does Taco Bell do background checks?

Yes, Taco Bell does background checks. However, it’s not clear if they do them on all positions or just leadership positions. We suggest you be prepared to disclose any information about your background.

Some states only look at an offense if it is less than seven years old. Here is a list of those states:

The eight states listed below show only guilty convictions:

Taco Bell’s reviews on glassdoor.com rated them with 3.7 out of 5 stars. Not too bad for a fast food job!

Working at Taco Bell does have some perks. Employees get discounts! However, health insurance isn’t offered unless you work a certain amount of hours, and it’s pretty expensive.

We know Taco Bell is in the customer service business, so you may have a hard time getting hired here with a violent or sexual offense on record.

All of their positions include handling money and credit cards, so theft charges may hinder you as well.

Taco Bell does a pre-employment drug screen for certain positions. Again, this may vary at each location, so we advise you to be prepared.

Do you have experience working at Taco Bell with a felony? Please let us know!

17 Certain Ways of Finding Jobs for Felons in...