Does Sonic Automotive Hire Felons in 2021? 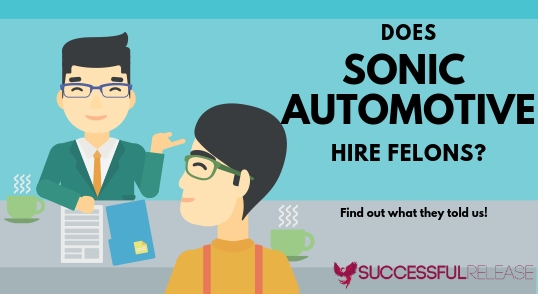 If you are a former felon who loves cars and is looking for a job, working at Sonic Automotive may just be perfect for you. But does Sonic Automotive hire felons? We contacted them directly to find out for you!

That’s one part of what we do here at Relaunch Pad: We want to help felons find work and get hired. Many of us have a criminal record, too, which is why we take this so seriously. Today, we’ll be focusing on Sonic Automotive, the fifth largest motor vehicle retailer in the US. In this article, you’ll also find answers to questions like:

Read on for our insider tips!

We asked Sonic Automotive directly about their hiring policy, and here’s what they said:

“We do hire felons after 7 years has passed, if it is not a violent crime.”

So, does Sonic Automotive hire felons? Technically, yes. This is great news for those former felons who have a record that is older than seven years! But what about those who don’t?

Has Sonic Automotive hired felons in the past?

It’s pretty likely that they have.

Considering their stance on hiring felons, it does seem likely that they would hire people with misdemeanors.

Is Sonic Automotive on the Ban the Box list?

Ban the Box is an initiative by civil rights groups that wants companies to remove questions relating to a criminal record from the initial job application.

The Fair Chance Business Pledge has a similar aim: Companies can take the Pledge and help remove barriers in the way of former felons to give them a well-deserved second chance.

Sonic Automotive isn’t on the Ban the Box list yet and has not signed the Fair Chance Business Pledge, but both lists are getting longer every day, so things might change soon.

Does Sonic Automotive have special programs for felons?

Sonic Automotive does not have any special programs in place that help felons right now. But there’s a lot of help out there for you!

One such example is The Fortune Society, a non-profit that wants to make re-entry into the workforce easier on former felons. Also check out Defy Ventures, a company that connects business owners and felons to help them help each other.

With such a large number of the US population having some sort of a record, time served no longer has to be a disadvantage. For many people, it’s the start of a new life, as it should be.

Since Sonic Automotive is a massive company with pretty reasonable hiring policies, we’d say your odds are high. They may not be on the Ban the Box list, but they do show a readiness to hire felons after a given timeframe, depending on the nature of the crime.

They’ve also got a number of entry-level positions, many of them accessible for people with criminal convictions — as long as they’re not relevant. See the next section to find out what jobs are available to you.

As a technician, you’ll be repairing and maintaining vehicles. While previous experience in the field is a big plus, training positions are available to those who have a passion for cars and are willing to learn. Technician jobs range from general to specialized. This can be to specific parts, a particular brand or an engine type. Your dad teaching you how to change brake pads will come in really handy here.

Sales consultants do not require any prior experience and the job is pretty self-explanatory, though it does say in the requirements that you should have a clean motor vehicle record and criminal history. Going by their statement, your record will presumably count as clean if seven years have passed since the felony. As with technicians, you can specialize in a particular area such as pre-owned cars, family vehicles or a specific performance type of car.

Additional jobs include receptionist, cashier or porter/valet. None of these jobs require a college degree or a lot of previous experience. That’s always a plus in a world where you can’t get a job without experience, but every job requires experience, right?

How to get a job at Sonic Automotive with a felony

First and foremost, you’ve got to head to their careers section, find a job you like and ace your application. You may think that that’s easier said than done, but we’re here to help you get it right.

Whenever you apply for a job, you’ve got to try and set yourself apart from the competition, starting from your resume. Make sure it’s specific to the given job — many people send out generic resumes to all sorts of companies, which is never an advantage. You want to show you’ve made an effort.

Before sending it in, you might want to show your resume to someone you trust or take it down to a career counseling center. Remember, that’s what places like that are there for. For more tips on how to make your resume stand out, see our guide.

The hiring process at Sonic Automotive goes from the application to a phone interview, after which you may need to take an online test or go straight in to meet someone at HR. Many online reviews detail tricky questions, such as: How would you describe a bad boss? So it’s a good idea to prepare for questions like this. Who wants to be surprised with that?

If you’re a motorhead, now is your time to shine. Try to focus on the fact that you love cars. This will show the person interviewing you that you’re passionate about their business and will make a good match.

But don’t worry if cars are not your passion. When applying for a sales position, remember that you’ve got to sell yourself first. If you can make the company want to hire you, they will likely assume you can sell a car, too.

This is one of those situations where having a criminal record can even be useful. Show them you’re the right person regardless of your past by putting a positive spin on it. Detail what you’ve learned and how you’ve grown because of your time in prison. This will show to Sonic Automotive is that you will be able to make a minivan appealing, too,  which is what they want you salespeople to do.

Does Sonic Automotive do background checks?

These are the states where no felony older than seven years is considered part of your record:

Then, there are eight states that don’t consider cases where you were found not guilty. These are:

However, if you live in one of the following states, your whole record will be looked at. No matter the verdict or the time passed, employers in these states will be able to see it:

Sonic Automotive is rated 3.6 out of 5 stars on glassdoor.com. Benefits scored highest, followed by career opportunities and corporate culture. A lovely 63% of reviewers say they’d recommend working there to a friend.

Right off the bat, it might be obvious that vehicle-related offenses such as car theft would make it difficult to get hired at Sonic Automotive. Since car theft forms a surprisingly small part of all felonies, it follows that most former felons will be able to get a job there.

The other one, as mentioned in their official statement above, is violent crime. This is a wide category that includes things from robbery to murder.

However, for many former felons who want to know how to get hired at Sonic Automotive, the answer is simply time. Sometimes, you’ve just got to wait it out.

Online reports stated that drug tests are performed routinely. This goes both for the hiring process as well as for working at Sonic Automotive.

Have you applied for a job at Sonic Automotive? Do you work there? Share your experiences!

If you’re a former felon who knows how to get hired at Sonic Automotive with a felony, you now have a chance to help! Let others know how you did it in the comments below.