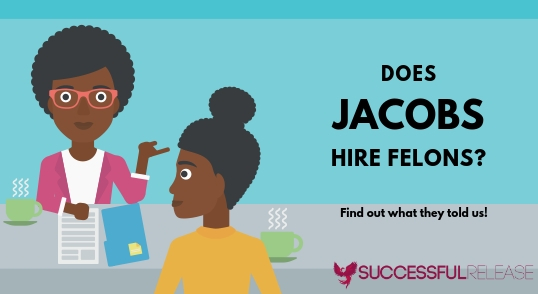 At Relaunch Pad, we help former felons by giving them information about companies they’re applying to. In this article, we will be dealing with one of the largest professional services corporations in the world as we figure out: Does Jacobs hire felons?

Jacobs Engineering was founded in 1947 and now has over 70,000 employees all over the world. CH2M, an engineering firm, recently merged with Jacobs. Together, they are a major global provider of technical, professional and construction services.

So let’s get right down to it and help you get a job at Jacobs with a felony. We know how tough that can be. In fact, we’ve been there! Many of us have records ourselves, so we bring our expertise to our job content as well.

We contacted Jacobs directly to give you useful resume and interview tips, as well as answer questions like:

Read on to find out how to get hired at Jacobs with a criminal record.

We contacted CH2M directly. Here’s what they said:

So, does Jacobs hire felons? The short answer is yes. Their policy seems pretty straightforward: If you’re qualified and they don’t think your felony relates to the job, they see no reason not to hire you.

Has Jacobs hired felons in the past?

They quite likely have, as they state that a criminal record does not necessarily disqualify employees.

It may help to understand just how many people are in your situation, as well. About as many Americans have a criminal record as college degrees. In today’s world, having a criminal record no longer has to be a disadvantage.

Does Jacobs hire people with misdemeanors?

It’s possible they do, considering their approach to felonies.

Ban the Box is an initiative started by civil rights groups that convinces companies to remove questions relating to a criminal record from the initial job application.

Does Jacobs have special programs for felons?

No. But they do have a charity, the Jacobs Family Foundation, involved in helping strengthen underprivileged neighborhoods. While this is not directly relevant, it does show that Jacobs aims to make a difference in people’s lives.

If you’d like to find out more about programs helping former felons get to work, specifically, check out the Work Opportunity Tax Credit (WOTC) program. It encourages employers to hire former felons, among others, by offering a tax credit.

Since Jacobs is a massive company with pretty reasonable hiring policies, we’d say the odds are average. They may not be on the Ban the Box list, but they will at least look at you as a person and weigh your case individually.

They’ve also got a large number of entry-level jobs, many of them accessible for people with no relevant criminal conviction. Read on to find out what jobs are available to you.

Jacobs has branches in almost all US states, so you can find entry-level positions in various areas from Virginia to Oregon. Your options are many: Refining the search on their careers site to include the term “entry-level” will help you find the best fit.

You can for instance apply to be trained as an operator, mechanic or a carpenter. To find out more about jobs like these, simply type the word ‘training’ in the search bar.

Alternative entry-level positions include pipe fitter, operations assistant, packaging and shipping clerk, or customer service assistant. With such a wide range of jobs, there is bound to be something that’s just right for you.

Some of these positions do, however, require that you have no criminal record. They may be connected indirectly to the US government, for instance, depending on the type of work and the location.

You can find out more about Jacobs from their fact sheet.

How to get a job at Jacobs with a felony

Well, you’ve got to apply. The CH2M careers site now redirects you to the Jacobs platform as well.

When you apply for the job you want, do everything you can to set yourself apart from the competition. This starts with a great resume. Tailor it to fit the job you’re applying for. Show it to someone you trust or take it to a career counseling center and let them look it over.

For more help on how to make your resume stand out, see our guide.

At Jacobs, you’ll be working on a team, no matter what your job is. If you want to be part of this team, behave as if you already are, and they will have an easier time imagining what that would look like if they hired you.

While it’s easy to pretend that everyone works at their dream job and life is one big party, this is often not the case. Maybe you’re just trying to work where you can, and that’s ok, too.

But when you go in for your interview, it’s important to behave like the job you’re trying to get is the dream. Be enthusiastic and think of the security a steady gig will give you. Think of where you may be in five years if this interview goes well.

Most importantly, be honest. You have a criminal record. Sure, that’s not ideal, but it’s nothing to be ashamed of. The person interviewing you may have one, for all you know. Bill Gates has one, as does Martha Stewart. The person writing this has one.

Having a criminal record doesn’t make you different. The thing that sets you apart is being prepared. Putting your best foot forward, not only in the way you look but also in the way you sound. Be respectful, approachable and professional, and don’t be afraid to be yourself.

Does Jacobs do background checks?

They do. Online statements differ on when in the hiring process the background check is done, but there is certainly one in your future if you apply for a job at Jacobs.

What’s more, there are eight states that don’t consider cases where you were found not guilty. These are:

However, if you live in one of the following states, your whole record will be looked at. No matter the verdict or the time passed, these states will see it:

Jacobs rates very highly on glassdoor.com, with 67% of reviewers saying they would recommend working there to a friend. Work-life balance and career opportunities scored the highest.

With such a large company, there will be many areas where a felony conviction is grounds for barring. Especially since Jacobs does a lot of work for the US government. On the other hand, there are likely just as many jobs where this is not so.

You should be able to find a large number of jobs to which your conviction is not related. Plus, with HR reports saying that the vast majority of ex-offender hires have been just as successful as hires with no criminal record, you’ve got stats on your side, too.

That being said, you will still find that certain convictions may bar you from a job. Warehouse jobs, for instance, won’t be given to people with theft convictions. Driving delivery vehicles will not be available to those with a car-related offense, and people who have been convicted of financial crimes won’t be given a job on the administrative side of the business. But don’t let that discourage you. As we said, there are plenty of options left.

Reviewers on job search sites have stated that drug tests are both part of getting hired and of working at Jacobs.

Have you applied for a job here? Do you work at Jacobs? Share your experiences!

If you know how to get hired at Jacobs with a felony, now is the time to help others! Let other ex-felons know how you did it in the comments below.