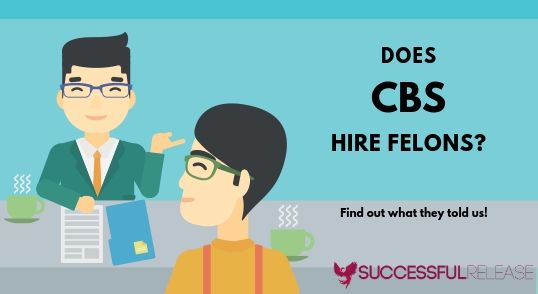 While it’s a difficult task for anyone to find work, being a felon can make it seem almost impossible. Finding the right job can help you create a new path in life, so let’s find out: Does CBS hire felons?

CBS Corporation is part of the television media industry. They’re best known for CBS News and the CBS Network. So if you’re interested in working in TV, read on to find out how to get a job at CBS with a felony. We’ll answer the following questions along the way:

We know the real world is tough. We’ve been there. Many on the Relaunch Pad team are former felons or professionals who work with them. That’s why we know how important it is to directly contact companies and ask them if they hire former felons. We also do background research so we can give you some application and interview tips.

Let’s look at how to get hired at CBS with a felony record.

We contacted CBS to see if they hire felons, but didn’t receive a response. That’s okay — we’ll continue our efforts. Meanwhile, keep reading and find out other helpful information we’ve discovered.

Has CBS hired felons in the past?

We simply can’t answer this at this time. We haven’t received an official statement from the company and we couldn’t find a firm answer either way in our research.

Does CBS hire people with misdemeanors?

We can’t say for sure that CBS will hire people with misdemeanors.

Ban the Box is an initiative to rid applications of the box that asks if a person has been convicted of a misdemeanor or felony. The Fair Chance Business Pledge, originating during the Obama Administration, is a pledge for companies to not discriminate against a person because of their past.

CBS isn’t on the Ban the Box list nor have they signed the Fair Chance Business Pledge. However, we filled out an application and know there’s no box asking about felonies and misdemeanors.

Does CBS have special programs for hiring felons?

Unfortunately, CBS doesn’t offer any special programs for felons at this time. If you’re interested in a program to increase your chances of being hired, check out your local employment office or workforce development agency for more information.

Relaunch Pad gives your odds of getting hired at CBS with a felony as uncertain. We haven’t received an answer from the company as to whether or not they’ll hire people with a felony. Additionally, our sources can neither confirm nor deny if they’ve hired former felons in the past.

But because there’s no box on the application asking about convictions, there’s still a chance to get your foot in the door.

CBS is a television network, so having skills in customer service or experience in journalism or news broadcasting will go a long way. The following is a small list of their entry-level positions:

Beginning in one of these positions lets you learn the ins and outs of the company providing you with the opportunity for promotions and advancement.

How to get hired at CBS with a felony

Since we’re still not sure if CBS will hire applicants with a record, it’s important to have a strong resume and great interviewing skills. Start by locating a job on the company’s jobs page that matches your skill set and what you’re looking for. Then customize your resume. Here’s how:

If you’d like some extra help with your resume, check out our resume guide or visit your local workforce development office.

Now that your resume is updated, let’s look at some interviewing tips:

Dress professionally. There’s something to be said about “dress to impress.”

Look and act the part.

Does CBS do background checks?

We haven’t received an official company statement and we couldn’t find anything that said whether or not CBS will do a background check. However, most companies will run some sort of check, even if it’s just to prove your identity and that you’re legally able to work there.

If your conviction was seven years ago, these states won’t bother with them on background checks:

And these states won’t look at anything where you weren’t found guilty:

However, some states will look at everything on your record, including the not guilty verdicts. Be aware if you live in these states:

Our team did some research to get a sense of what CBS Corporation is like as a company. Glassdoor.com gives them 3.5 out of 5 stars. Of the 1,025 reviews, most of them are positive. Here are a few pros and cons reported by CBS employees:

Does CBS hire felons? While we can’t answer yes or no to this question, there are certain felonies that might hurt your chances.

Violent felonies will be difficult because you’ll be working closely with a large number of co-workers and various departments within the company.

Theft, fraud and sex crimes may also be a problem because, depending on your position, you may be required to work directly with the public.

According to online sources, CBS doesn’t conduct employee drug tests. They may, however, drug test interns. Either way, it’s best to prepare as if they do. You don’t want to make it all the way through the interview process and then lose the offer for a failed drug screen.

Were you able to use the information in this article to get a job at CBS with a felony? We’d love to hear how you did it! You never know who you can help.

17 Definitive Methods of Finding Jobs for Felons in...

15 Proven Methods for Finding Jobs for Felons in...