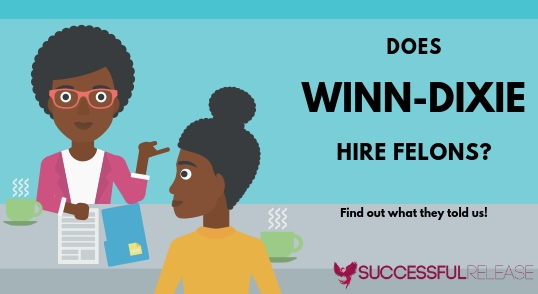 Finding work is a job in and of itself, for anyone, even at a grocery store. But don’t worry — if you’re a former felon living in the southeast, we’re going to find out: Does Winn-Dixie hire felons?

Winn-Dixie is a grocery store company with liquor stores and in-store pharmacies. So, if you’re interested in retail and customer service, keep reading and we’ll help you get a job at Winn-Dixie with a felony. We’ll give you solid resume and application tips, plus look at the following questions:

Why are we so invested? Many here at Relaunch Pad have been in your shoes. Our team is mostly made up of former felons or professionals who have worked with former felons for a number of years. We know what it can be like trying to find a job with a criminal background. That’s why we directly contact companies and ask them if they hire former felons.

Our goal is to help former felons get back to normal life.

Now, let’s take a look at how to get hired at Winn-Dixie with a felony record.

We reached out to Winn-Dixie to ask them if they hire former felons, but haven’t received a response.

It’s our job to find the answers to your questions, so we’ll keep trying to make contact. In the meantime, our research has provided answers to this and other important questions.

Has Winn-Dixie hired felons in the past?

We’re not sure, but an internet search shows that they’ve given people with felonies a second chance within the company.

Does Winn-Dixie hire people with misdemeanors?

We don’t have an official statement from the company to confirm or deny if they do.

Ban the Box is an initiative to get rid of the box on applications that asks if the applicant has been convicted of a misdemeanor or felony. The Fair Chance Business Pledge began during the Obama Administration, urging companies to look past an applicant’s criminal past and focus more on their employment history and skills. Both Ban the Box and the Pledge serve to give those with convictions on their records a fighting chance at a normal life.

Online research doesn’t show Winn-Dixie on the Ban the Box list or that they’ve signed the Fair Chance Business Pledge. Not only that, but the application we saw contains the box asking if you’ve ever been convicted of a misdemeanor or felony.

Does Winn-Dixie have special programs for hiring felons?

Research didn’t show that they have any special programs for hiring felons at this time.

We think the odds of being hired at Winn-Dixie with a felony are average. While they’re not on the Ban the Box list and haven’t provided us an official statement, we’ve heard they’ve hired people with convictions in the past.

Since Winn-Dixie is a grocery store, entry-level jobs will include stockers, baking associates and cashiers. Each of these positions will give you a chance to learn how the company operates and set you up for promotions. These jobs usually include shift work and some physical tasks (such as cleaning), but they don’t ask for a lot of experience.

How to get hired at Winn-Dixie with a felony

So you’re interested in a job with the company, but aren’t sure where to start. Let’s begin with the resume and application:

Maybe you’re here for interview tips? Before you give yourself a panic attack, we’re going to give you some helpful interview tips for Winn-Dixie:

Does Winn-Dixie do background checks?

Again, we haven’t received a response from Winn-Dixie, so we can’t say for certain. However, their careers page states that applicants must be able to pass a background check and drug screen.

All states are different when looking at background checks. For example, the following states don’t consider information more than seven years old:

These states don’t bother with any cases where you were found not guilty:

But beware if you live in these next states. They can and will look at your whole record, including the not guilty verdicts:

We did some research to find out Winn-Dixie’s ratings on glassdoor.com. They have 3 out of 4 stars. Of the 1,609 reviews, 62% approved of the CEO and 48% said they would recommend Winn-Dixie to a friend. Most of the past and current employees who left reviews agreed that the hours are good, but the pay could be better.

Does Winn-Dixie hire felons? Our research shows they do. But keep in mind that this is a grocery store where you will be dealing directly with customers, money and merchandise. Therefore, some convictions may make it more difficult to get hired at Winn-Dixie. For example:

And while these charges may make it more difficult to get a job here, don’t freak out. Remember, they’ve hired former felons in the past.

Winn-Dixie says right on their website that they do drug test. Online sources say the company will do one after the initial interview process is over but before an actual employment offer is made.

Were you able to use this article to get a job at Winn-Dixie with a felony? We’d like to hear from you. Use your experience to help others in the same situation!