Does Volkswagen Hire Felons in 2020? 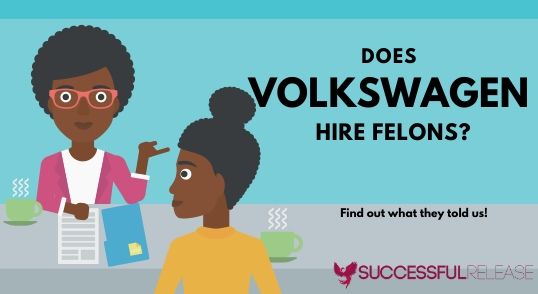 Volkswagen is one of the biggest automotive companies in the world. They have many career opportunities, but does Volkswagen hire felons?

Like most former felons, you’re probably well aware of how hard the job market can be for people with a record. We are, too! A lot of the staff here at Relaunch Pad have justice-involved backgrounds, so we build off of that experience to help you out. We even go directly to the source, asking employers about their policies for hiring former felons.

We also look into a number of other key considerations that impact your ability to get hired, like:

So, let’s get right down to it, shall we? Read on to learn everything you need to know about how to get hired at Volkswagen!

We went directly to the source to find out what Volkswagen has to say about their approach for hiring former felons. Unfortunately, they haven’t gotten back to us yet. We’ll try again, don’t worry. Until then, we’ve done some independent research.

Based on what we can see online, there’s no policy directly touching on this..

Has Volkswagen hired felons in the past?

We haven’t found much information that suggests the company has a history of hiring former felons. This doesn’t mean that they don’t! It just means we don’t know about it.

Does Volkswagen hire people with misdemeanors?

Unfortunately, we also haven’t found any indications that they hire people with misdemeanors. Once again, this information may change when we hear from the company.

The Ban the Box movement is designed to remove questions about a candidate’s work history from job applications. The goal is to help candidates be seen for their qualifications instead of the mistakes of their past.

Then there is the Fair Chance Business Pledge. People who sign this are promising not to discriminate in their hiring policies.

Volkswagen is not involved in either of these initiatives at this time, we regret to say. But this doesn’t necessarily mean they won’t hire someone with a record! Just that they’re more likely to want to know about it.

Does Volkswagen have special programs for hiring felons?

Some companies also have special programs made with the intention of expediting the process of finding work for former felons.

Volkswagen doesn’t have any such programs that we know of, but again, this isn’t very surprising. The majority of businesses do not have these types of arrangements.

What do we know? From what we’ve seen so far, it looks like your chances are low. Our online sources said Volkswagen doesn’t often hire people with felonies. They don’t participate in the Fair Chance Business Pledge, and they don’t have any programs.

Once we hear from the company, it’s possible we’ll be able to upgrade those odds.

Volkswagen has a number of jobs at the entry-level. For one thing, there are always customer service positions. These are call center jobs that will have you answering questions over the phone all shift.

There are also some factory positions that may be good for candidates wanting a more hands-on job.

How to get hired at Volkswagen with a felony

Even though your odds of getting hired at Volkswagen are low, you might be able to boost them with the right strategy. As with any job, everything starts with the resume.

Always highlight relevant experience. In this case, that means calling attention to a history of customer service or factory work.

The good news is that customer service experience comes from many different jobs. For example, if you’ve worked in a store or a restaurant, that counts.

Factory experience may be a little more difficult to come by. If you don’t have any, you can still impress by demonstrating your teamwork skills. In this case, any job that demanded you work closely with a group of people will look good on the resume.

Make sure the information provided is presented as professionally as possible, no matter where it comes from. This could mean getting professional help.

Most communities have free career centers, many of which are willing to look at your resume and help you improve it. Some even offer free interview clothes and other resources that make it easier to get a job.

If everything goes well, you’ll then be asked to sit for an interview. For this, you’ll want to show up looking your best. Dress professionally, and remove or cover any piercings or tattoos.

Most of all, though, be confident. You’re talented and qualified. Now is your time to prove that!

Does Volkswagen do background checks?

Volkswagen does do background checks.

However, what they find out will depend largely on where you live.

For example, if you live in any of these states, they will only be able to look seven years into your history:

There are also states that don’t list not guilty verdicts. In these places, Volkswagen only learns about crimes you’ve been found guilty of:

Regrettably, some states disclose everything. The company will find out everything in the following states:

We also wanted to get an idea of what it is like to work here. From what we saw on glassdoor.com, it looks like the company has an average rating of 3.9 out of 5 stars.

Their lowest rating is 3.3 for career opportunities. Their highest rating was 3.8 for compensation.

Because customer service is involved, it may mean that people with a history of violent or sexual offenses might not be able to get a job at Volkswagen with a felony!

People in the factory setting may be held to a different standard. There, a history of drug- or alcohol-related offenses may stand in your way.

It seems they will drug test.

If you have any experience with this company, we want to hear from you. Does Volkswagen hire felons? Did our guide help you figure out how to get a job at Volkswagen with a felony? Tell us what you know!