Does Veritude Hire Felons in 2022? 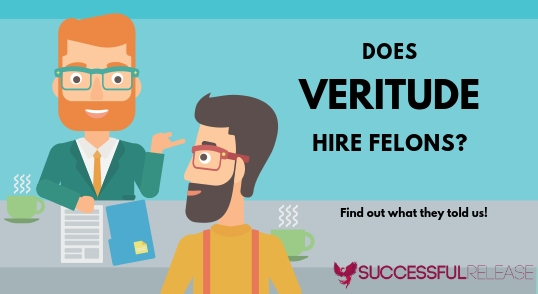 Veritude is the internal staffing resource for Fidelity Investments, meaning it is an employment agency for jobs at Fidelity. So, does Veritude hire felons? Read on to find out.

Fidelity Investments is a financial services company headquartered in Boston. We contacted them directly to see if they hire former felons so we can help you get hired at Veritude!

In this article, we will answer important questions you may have, like:

Relaunch Pad knows that mistakes happen, but we also know that everyone deserves a chance to start over. That’s why we hire felons ourselves. Since many of us have felonies on our records, you can be sure that we know what it takes to get back on your feet.

Part of that includes landing a job. If you want to know how to get hired at Veritude, this is a good place to start.

When we contacted Veritude directly, we were told that:

“Veritude candidates must pass the Fidelity Investments’ background check (criminal, employment, education and often credit).  Items in these categories are assigned a point value, and each role we have has a certain point threshold which cannot be exceeded. That being said, I believe most felonies would be assigned a point value that would exceed most of these hiring thresholds — making the candidate ineligible in an overwhelming number of cases.”

In short, this means that a number of people with criminal records will not be able to work at Veritude. But while we have no information on how their internal point system works, it still seems possible to score below the threshold — especially with a smaller felony or misdemeanor.

What exactly does all this mean for you? And, most importantly, does Veritude hire felons?

Has Veritude hired felons in the past?

It is unlikely that Veritude has hired former felons in the past. This does not necessarily mean that it is impossible to get a job at Veritude with a felony, though. It just that getting a job may come with unique challenges.

Does Veritude hire people with misdemeanors?

Since misdemeanors are less serious offenses than felonies, you have a much better chance of getting hired if you’ve only got a misdemeanor on your record.

Ban the Box is a campaign that aims to remove questions about an applicant’s criminal record from the job application. This is meant to help the increasing number of Americans with a felony on their record land a job.

The Fair Chance Business Pledge is based on the same idea: Businesses are encouraged to take the pledge and commit to removing the barriers that stand in the way of former felons seeking employment.

Unfortunately, Veritude is not on the growing list of companies to adopt Ban the Box policy, nor have they made the Fair Chance Business Pledge at this moment.

Does Veritude have special programs for felons?

No, they don’t — and that’s not a surprise, after reading their official statement.

However, there are a large number of programs, run by the US government as well as non-profit organizations, that aim to help felons get a job and get on with their lives.

Take Project H.O.P.E., for instance: This governmental program helps felons reintegrate into society. They provide assistance in many areas, including employment.

Considering all of the above, we have to say that the odds of getting hired at Veritude are low. This does not mean you shouldn’t apply, but you might want to keep an open mind and try other companies.

Veritude is a large company in the finance sector, meaning that there aren’t many entry-level jobs. There are also very few jobs at Veritude that do not require an extensive background check, and many positions demand that employees have no criminal record.

But you do still have some options if you’d like to start working for the company. We’ve included a selection of possible jobs, but you can find others specific to your qualifications on their careers website.

Some entry-level positions at Veritude include:

If you have a driver’s license and comfortable with driving a delivery van, this job could be right for you.

This job is much like that of a secretary, meaning it requires handling sensitive information.

If you’ve got IT experience, this job is ideal for you. You will manage inventory and provide technical support.

You will be in charge of scheduling and arranging meetings, dealing with logistics and documentation.

How to get hired at Veritude with a felony?

This country has the highest incarceration rate in the world: According to an insightful article in the New Yorker, about six million people are under correctional supervision in the United States. That is almost ten times the population of the nation’s capital! Many companies will need to revise their hiring practices to accommodate new workers.

That being said, Veritude still has very strict hiring policies, and getting a job there with a felony on your record will be challenging.

When you apply for a job at Veritude, you will need to pay extra attention to getting your application in order. A resume that may have worked for another company will have to be optimized for Veritude. See our guide to the perfect resume for more help.

Put on a professional, tidy outfit. If you don’t have one ready, you can easily rent one for the occasion. Many companies specialize in helping people dress for job interviews.

If there is no place like this in your area, go to your local dry cleaner’s and ask if they’ve got a spare suit. Many people forget their clothes at the cleaners, where they sit around unused for years. You might be lucky enough to find something in your size, and you may only need to pay for the cleaning.

While the job you’re applying for may not require a suit, it can set you apart if you put one on for the interview.

Does Veritude do background checks?

They most certainly do. While asking about a criminal record on the initial application is not legal in some states, such as Veritude’s home state of Massachusetts, they do inquire about your record in other states, and will definitely perform a background check at some point in the hiring process.

Additionally, many jobs at Veritude legally require you to tell them about your record immediately, even in states where this wouldn’t be the case normally. This is because certain jobs require you to have no criminal record — such as the position of security guard, for example.

(* there are certain positions where other conditions apply)

There are eight states that don’t consider cases where you were found not guilty part of your record. These are:

However, if you live in one of the below states, your whole record will be available to employers. No matter the verdict or the time passed since the felony, employers in these states will be able to see it:

Veritude rates at 3.8 out of 5 on glassdoor.com, with 59% of reviewers stating they would recommend working there to a friend. The categories that scored highest were Career Opportunities and Work-Life-Balance, though Benefits received great ratings as well.

What felony convictions may have a hard time getting hired here?

Veritude’s policy for hiring felons is on the stricter side, which means that having any kind of felony on your record is a drawback.

You may have a hard time getting hired at Veritude especially if your felony is related to the job you’re applying for.

Remember, they only allow a certain number of ‘points’ which they tally from your criminal record.

Let’s consider the entry-level positions we listed. Here are the felonies that will stop you from getting hired:

You won’t be able to work in the field of IT if you have virtual crime on your record or HR if you’ve got a misconduct charge. Jobs where a driver’s license is required won’t allow people with a DUI, for instance. Veritude deals with recruiting for a large financial firm, so crimes related to money will also likely be barred.

Think about your record before you choose a job to apply to.

While we have no information directly from the company, online reviews do talk about drug tests being performed.

Have you applied for a job here? Share your experiences!

Did you get a job at Veritude with a felony on your record? Have you applied for a job there?

If you’ve got any tips or advice, let us know in the comments so we can help others together.