Does The United States Air Force Hire Felons in 2021? 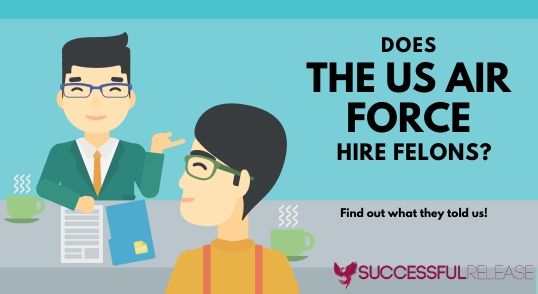 Working for a distinguished branch of the military sounds like a smart career choice. Millions use them as an opportunity to serve their country while securing a brighter future, but does the United States Air Force hire felons?

At Relaunch Pad, our goal is to help people with records navigate a job market that is often unfriendly to them. To do this, we go directly to the source and ask employers about their hiring policies for former felons.

We also ask other important questions such as the following:

To find the answers to these questions, and more, read on!

As always, we reached out to the Air Force to find out their policy towards hiring former felons. Unfortunately, we have not heard back from them at this time. We will continue working to establish contact so as to update this information.

In the meantime, we have done our own independent research. Based on what we found online, the Air Force will consider ex-felons. A firsthand source said cases are looked at individually.

Has the United States Air Force hired felons in the past?

The Air Force has hired felons in the past. While we still cannot say how this branch of the military makes its hiring decisions, it is well-documented that people with records have served in the past.

Does the United States Air Force hire people with misdemeanors?

In addition to hiring people with felonies on their record, the Air Force also has a history of accepting candidates with misdemeanors.

Is the United States Air Force on the Ban the Box list?

The Ban the Box Movement is an initiative to eliminate questions about a candidate’s criminal history from job applications. There is also the Fair Chance Business Pledge. Businesses that sign this pledge are making a promise that they won’t discriminate in their hiring practices.

The Air Force is not associated with either of these movements. They ask about criminal history on their application and will consider the information in their hiring practices.

Does the United States Air Force have special programs for hiring felons?

While the military does have many special recruiting programs, none of them target former felons.

The Air Force is a public institution. As such, their hiring practices are actually fairly well documented. So, does the United States Air Force hire felons and do you have good odds?

It is definitely possible to get a job at the United States Air Force with a felony. However, it is usually fairly unlikely that things will work out that way.

Historically speaking, the Air Force has been very conservative in its approach to hiring former felons. That being the case we have no choice but to rate your chances as low.

It will likely depend on several factors, including the nature of your offense, the amount of time that has passed since your conviction and the other details of your background.

Now that we know it is technically possible to get a job at the United States Air Force with a felony, here are a few entry-level positions you might come across.

There are actually many different types of jobs within the Air Force. Depending on your qualifications, you may seek work as a pilot, an electrical specialist, a medic, a transportation specialist or a facilities operator.

That said, there are many other types of jobs as well, so it may be in your best interest to peruse their catalog of positions yourself to get a better sense of what they have to offer.

The Air Force may be reluctant to hire former felons. That means you really have to wow them with your application. First things first, you will need to craft an expert application. Most people struggle with writing resumes which means you may want to seek a little bit of help.

Career centers are one great way to get help with your resume. They may also be able to help with the interview. Some organizations will even provide formal wear to people that can’t afford it to improve your chances of getting hired. Take some time to look into your community resources!

Even though there are very few jobs that compare well to the responsibilities of a member of the Air Force there are still ways to impress recruiters with your background. For example, the military is extremely collaborative. Any positions in which teamwork or leadership were key will look good on your application.

If you have technical experience, it might also be worth highlighting. Many of the jobs involve working with computers and other sensitive equipment so anything that highlights your qualifications with these skills will help. Even experience as a contractor, an electrician or an IT professional could help you land the job.

Once you send your application, you will be asked in for an interview. Remember that military culture is quite a bit different than civilian life. Dress in a very nice, neat fashion and be prepared to conduct yourself formally.

Does the United States Air Force do background checks?

As you would probably guess, the United States Air Force does do background checks. In fact, military background checks are notoriously detailed and include information about your criminal record, mental health and even financial history.

In general the results of a background check may depend on where you live.

For example, these states only show your record from up to seven years back:

And in these states, employers only learn about offenses you were found guilty of:

Then there are states where your whole record is on display. In these locations potential employers learn everything:

State laws may or may not apply to the type of background checks that the Air Force does. However, security clearance vetting is a different matter altogether. If you’re applying for a position that requires security clearance, you can expect that your entire history will be analyzed regardless of where you live.

We also went to glassdoor.com to find out what the enlisted have to say about working for the Air Force. We found that the Air Force has 4.2 out of 5 stars. The highest rating was 4.2 for opportunities, the lowest was 3.2 for a balanced work and home life.

Some felonies will definitely be more disqualifying than others. Because the organization is all about harmonious collaboration, any violent or sexual offenses will be weighed heavily against you. A direct source told us you must be able to hold your gun rights to work for the military. Therefore, if you’re unable to do so, you’ll be passed over.

Does the Air Force drug test?

If you’re not sure the Air Force is for you, try another branch: