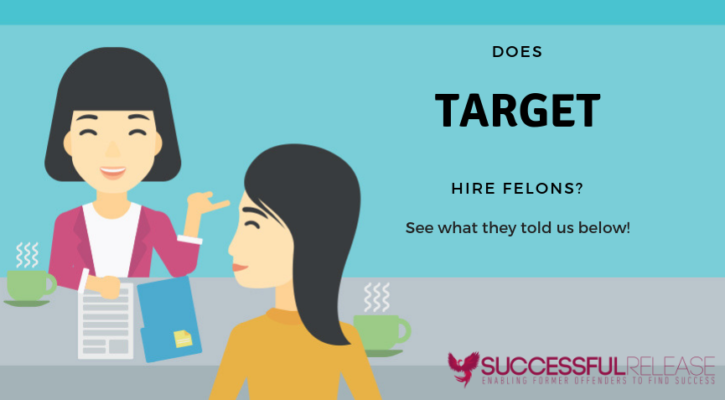 We’re so glad you are here because it means you’re serious about getting a job, helping your family and creating a successful life. At this point, you’re probably wondering, does Target hire felons? We’re going to answer that question and many others in this article, including:

To do this, we directly contact each company and ask them about their hiring practices. We then put together tips on applying and landing an interview so you have the best chance possible.

Relaunch Pad knows what matters when doing a job search with a record. To give you the best information possible, we hire former felons ourselves. Real tips from real people.

So, without further ado, let’s look at how to get a job at Target with a felony.

We asked Target directly if they hired those with a felony conviction and they told us:

“At Target, we are proud of our record on diversity and inclusivity in the workplace. As a leader in this area, we have played a role in helping remove barriers that individuals with criminal records face when seeking employment. We continuously strive to recruit talented and diverse team members, and we realize that one way of accomplishing this goal is to consider the impact of a person’s criminal record on their ability to seek employment.

As a result, in October 2013, Target announced plans to remove the previous conviction question from the initial employment application nationwide. This process was finalized in June 2014, and Target no longer gathers criminal history information from applicants until the interview process (or after conditional offer in locations where asking earlier is prohibited).

While removing the question from the initial employment application allows applicants to tell their story before a hiring decision is made, we believe that it is still important to consider a person’s criminal conviction history when making hiring decisions. Target’s background check process is carefully designed to ensure a safe and secure working and shopping environment for team members and guests, while treating all applicants fairly.

Our criminal background check process excludes only those applicants whose convictions could pose a significant risk to our guests, team members or property. This process considers, among other things, the age and type of conviction, the number of convictions the individual has on their record, whether the applicant completed their sentence without further violations, as well as the age of the applicant when the crime was committed. Target specifically informs applicants that they should not disclose arrests or any convictions which have been ‘expunged, annulled, sealed, statutorily eradicated, pardoned, or dismissed upon condition of probation.’ Because of the nuances of the process, it is impossible for us to say whether a particular candidate’s criminal record would be disqualifying.”

Target did not confirm or deny if they have hired felons in the past, but don’t worry about that. As you can see from their response above, it is likely that they have hired those with prior convictions. Most importantly, they believe in helping former felons get a fair chance.

Does Target hire people with misdemeanors?

We could not find specific information on this, but we strongly suspect that Target does hire people with misdemeanors.

The Ban the Box campaign advocated by civil rights groups gets companies to remove the box asking about criminal history from their applications. Its sister movement, the Fair Chance Business Pledge, works to help former felons be treated equally.

In 2013, Target announced plans to remove the previous conviction question from the initial employment application nationwide. The process was finalized in 2014, and Target no longer gathers criminal history information from applicants until the interview process. They are on the list!

This is great news. You will be initially looked at based on your experiences, not your criminal history.

Does Target have any special programs for hiring felons?

Target does not have any specific programs for hiring felons. However, other companies in your community do. Always check with your local workforce center or job placement agencies, though. They have knowledge about their specific communities and will point you in the right direction.

We think there is a high chance you’ll get hired at Target with a felony. While it is great that they don’t ask about criminal convictions on the application, they still perform background checks and will discover your criminal history. Ultimately there is no guarantee, but you have a better shot here than elsewhere.

Target is a growing company, which is a testament to the value customers place in them. In just three months, the number of shoppers in their stores increased by three percent. More shoppers means they need more employees.

So, what kind of jobs can you expect at Target? If you look at their employment page, you will likely always find postings for positions such as the following:

For these jobs, you can expect light labor, like cleaning, stocking shelves and getting the shopping carts out of the parking lot. Most of these entry-level positions do not require a high level of education, though you should always highlight your skills on the initial application and in an interview.

How to get hired at Target with a felony

One of the best ways to get a job at Target with a felony is to show you would make an excellent team member from the moment you show up. Get online and explore the positions you are interested in applying for.

Don’t get discouraged if you don’t have experience in this area. Get creative. What jobs did you hold in prison that can translate to real-world skills? Dorm jobs, librarians, kitchen workers, clerks and more are all positions that should have given you valuable skills.

Think about the things you can put on a resume after working those jobs:

Choose the store you want to apply for and go there in person. Yes, you can apply online, but getting face-to-face with the person who will be hiring you is always better. When you show up, be positive and upbeat. Make sure you are well-dressed and groomed.

You don’t want a manager’s first thought to be, “I bet they did time.” You want them to think, “I want this person on my team.”

We could not find any information regarding Target’s tattoo policy. So, if you went a little crazy with the prison tats, cover them up the best you can when you first go put an application in or for an interview.

If it is getting close to a holiday, they may be looking for immediate help. If you land an interview, that is your opportunity to explain your record and let them know how much you’ve changed. Ask questions about the job you are applying for and about the company. This will show them you are interested.

Does Target do background checks?

Yes, Target does perform background checks. Like we reported in the beginning of this article, Target does believe it is still important to consider a person’s criminal conviction history when making hiring decisions. While this doesn’t necessarily disqualify you, it is something you should be aware of.

Some states don’t even look at offenses that are more than seven years ago. If you are on that sixth year, you may want to wait a year before applying. These states don’t look at your record if it’s been seven years since your conviction:

Guess what? There are some states that do not even show court cases where you were found not guilty. Eight states are currently on this list:

However, there are still many states that look at your whole record, even the cases where you were found not guilty. If you live in one of these states, that they will see everything:

Because Target is such a large company, they have thousands of reviews on the site glassdoor.com. Target has a 3.4 score out of a possible 5 and 63% of respondents say they would recommend working at Target to a friend.

Most of the comments from former employees were positive. The negative comments, however, revolve mostly around what you would expect from a large store: very busy, some bad supervisors and the pay is a little low.

Does Target hire felons? Yes, but do they hire someone with your type of felony? There are some felonies that will stop you from getting hired. Remember earlier when we said that Target looks at each individual’s case? Here are some cases where your record may make it harder for you to get hired:

Be aware of your convictions when you apply for certain positions. You’ll more than likely be able to find work in an area where you don’t have a conflict. They may hire you for their warehouse or some other area that lets you get a second chance so you can work on rebuilding your life with a reputable company.

We could not find a specific policy related to drug testing. However, in our research, we found they typically do not drug test regular employees. It seems that they will for managers, however.

We want to hear your experiences, specifically on how to get hired at Target. If you’ve gotten a job there with a felony or misdemeanor conviction, tell us how you did it and what the hiring process was like.

Thanks for stopping by and good luck with your job search!