Does Supercuts Hire Felons in 2021? 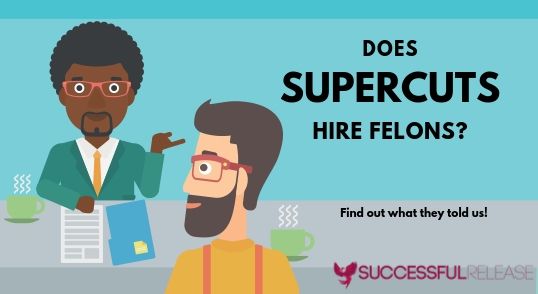 If you like cutting and styling hair, you might have thought about working at a salon. This brings us to the question: Does Supercuts hire felons? Whether it’s talent or training, you should be putting these skills to use!

The entry-level jobs available at Supercuts can get you started in barbering and cosmetology. We’re going to find out if they’re a good start for you. How? Relaunch Pad contacts companies directly to learn about their hiring and screening practices for candidates with criminal histories.

Answering these questions is the first step in your application process. This article will show you how to get hired at Supercuts with a felony, so let’s get started!

Supercuts is actually a franchise, meaning that each location is operated by a different store owner. This means that hiring depends on the practices and preferences of each store owner or owners.

From our research, it doesn’t seem like there’s an official policy for hiring former felons here. The best way to find out whether or not your local Supercuts hires felons is to apply!

Has Supercuts hired felons in the past?

It seems like Supercuts has probably hired felons in the past, but we couldn’t confirm this with certainty. Like we mentioned earlier, each location is different, so hiring depends on who owns the local store.

Does Supercuts hire people with misdemeanors?

Unfortunately, we don’t have an easy answer to this question. Instead, it’s case-by-case and depends on your record and what managers are looking for.

Many businesses show their support for fair hiring practices by joining the Ban the Box initiative. Companies on the list won’t ask about your criminal history on job applications. This allows companies to avoid judging candidates before getting to know them.

Also, the Obama Administration developed the Fair Chance Business Pledge, which encourages companies to look at candidates as a whole. Instead of judging based on past crimes alone, these businesses also consider rehabilitation efforts, time since convictions and other factors that are often ignored.

Unfortunately, Supercuts isn’t part of either of these awesome programs. Instead, each franchise store gets to decide how candidates are screened and hired.

Does Supercuts have any special programs for hiring felons?

From what we can tell, this company doesn’t offer any special programs for hiring former felons. Although they have one program to train barbers with no styling experience, it’s not specific to felons. In other words, they’re willing to train certain candidates, which is one way to get hired at Supercuts with a felony.

Based on our research, your chances are uncertain. We found enough evidence to suggest that they probably consider former felons as potential candidates, though nothing concrete. They aren’t on Ban the Box or other felon-friendly initiatives, either. So then does Supercuts hire felons? Even though there’s no simple answer to this question, that doesn’t mean it’s not right for you!

At Supercuts, entry-level jobs are available for hairstylists and barbers. Most of the time you’ll be doing grooming-related tasks, but sometimes you’ll have to do some minor bookkeeping. Don’t worry, this mostly means booking appointments and taking payment for your services.

This can include experience cutting hair in prison or the community. Also, any past barber or hairstylist training is perfect for getting noticed at Supercuts. Even cutting your own hair counts!

Supercuts jobs are extremely customer-service focused. As a stylist, your job would be to make clients happy and deliver a great haircut experience every time. Show your personality!

Even though you may have to explain your criminal record to an employer, don’t automatically count yourself out! Most Supercuts locations are in need of talented employees — even those with imperfect pasts. Tell your story honestly, but don’t automatically assume the worst.

Lucky for you, Relaunch Pad has an entire guide to creating dynamite professional resumes. Hiring managers decide who gets interviewed based on resumes. Does yours stand out?

The answer is that it depends on your local Supercuts, and how its hiring managers feel about hiring former felons. Supercuts is a franchise business, and individual store owners make the final call.

Requirements for screening job seekers’ criminal records vary greatly between states. Some places are much more relaxed, including a handful of states that totally ignore offenses more than seven years old. These lenient states include:

(* some salary brackets still require one)

In some states, even if you were found not guilty of a crime, your record will be held against you. However, these states understand that not guilty means the record doesn’t need to be shared:

Some states are much stricter and less forgiving of criminal records in hiring. These states look at your whole background, including both guilty and not guilty verdicts:

On the employee review website Glassdoor, Supercuts has an average of 3.0 out of 5 stars. This doesn’t suggest the best employee experience, but it isn’t terrible. If you’re looking to get a job at Supercuts with a felony, this rating shouldn’t scare you.

Past employees state that working here is a great start to a career in hair styling and beauty. However, many complained that they felt overworked due to long shifts and lack of staff during busy times.

Some criminal records make it difficult to get hired at Supercuts, including stealing money from work. This can be seen as a breach of trust, so that’s definitely a barrier to jump over.

You also need to be friendly when interacting with the clients. Hiring managers could screen for convictions that suggest difficulty with these responsibilities.

Also, if you have a past including harassment at work, that might damage your chances.

In the course of our research, we couldn’t find an official company-wide policy for drug testing at Supercuts. Each store has different policies and procedures, and it’s always wise to be prepared to take one.

Have you applied or worked here before? Share your experiences!

Did you get hired at Supercuts with a felony? Telling your story can make a difference for people in a similar situation.