Does Southwest Airlines Hire Felons in 2021? 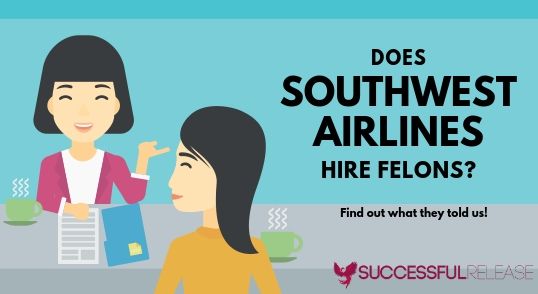 Southwest is a major US-based airline that handles flights all around the country. The widespread nature of the franchise means that they produce thousands of jobs, but does Southwest Airlines hire felons?

That is the question we aim to answer today. At Relaunch Pade, our objective is always to supply the best information possible to former felons looking for a job. We do this by going directly to the source and asking companies directly about their hiring policies.

We get the struggle so want to make your experience as easy as possible. Some of our employees are even former felons themselves who have firsthand experience trying to find work after prison. Who better to guide you?

To help give you a fighting chance, we answer several key questions that are likely to be weighing on your mind:

Take a look at our thorough research about this company to see what your chances are.

Unfortunately, we haven’t been in contact with Southwest Airlines yet. We’ll keep trying, though!

Though it’s impossible to say anything for certain without hearing from the company, it looks like Southwest doesn’t have any policies that specifically prevent them from hiring former felons.

Has Southwest Airlines hired felons in the past?

Based on our independent research, it appears that some former felons have been able to find work at Southwest. However, until the company confirms our information it’s difficult to say how or why the company makes its hiring decisions.

We don’t know whether or not they will hire people with misdemeanors on their record.

However, the company may have hired former felons in the past and places willing to hire candidates with felonies on their records will also hire people who have misdemeanors.

Is Southwest Airlines on the Ban the Box list?

Ban the Box works to remove obstacles for former felons in the hiring process. Specifically, the movement asks employers to take questions about criminal records off their job applications.

There is also the Fair Chance Business Pledge. Businesses that take this pledge promise not to discriminate against former felons during the hiring process.

Unfortunately, Southwest Airlines has not participated in either movement. Though we never like to see this, it also isn’t the end of the world. The majority of businesses are not involved in these promises, though many are still willing to hire former felons (like Southwest seems to be).

Does Southwest Airlines have special programs for hiring felons?

From what we can see, Southwest Airlines does not do anything of this nature.

So, what’s the verdict? Does Southwest Airlines hire felons? From what we know, the chances seem uncertain.

While it may be possible to get a job at Southwest Airlines with a felony, we don’t know enough about the company’s hiring policies to say anything for certain.

The good news is that the company seems to have hired former felons in the past. However, without knowing more we cannot upgrade the odds of getting hired.

From ticket takers to baggage handlers, there are lots of positions available for people with customer service or manual labor experience.

There are also higher-paying jobs for people with specialty experience. For instance, they also have positions for flight attendants and pilots.

Like most airlines, Southwest operates around the clock. That means that there will be day and night shifts virtually every day of the year.

How to get hired at Southwest Airlines with a Felony

It starts with a killer application. The key is always to highlight relevant previous experience that might qualify you for the job.

To guarantee that you’re sending out the best application possible, consider getting a second pair of eyes to review your resume. If no one in your life is qualified to do this, a career center would be happy to help.

A good application will (hopefully) result in an interview. As with any interview, it’s a good idea to present yourself in the most professional way you can. This means wearing nice clothes, covering your tattoos and piercings, and demonstrating confidence the moment you step through the door.

Your objective in the interview should be to make a good impression, and consistently demonstrate why you’re a good fit for the job. To do this as effectively as possible, consider going over common interview questions with a friend. Practice talking about previous experience in a way that sounds natural.

If you’re worried about your record keeping you from getting the job, you may even find it worthwhile to bring up the time you spent in prison so you can frame it in a positive light. For example, if you worked a job in jail that gave you experience relevant to the position you’re applying for, it will be useful to mention it.

It’s easy to get nervous about an interview, but remember: They want to talk to you because they think you’re a good candidate. Prove them right!

Does Southwest Airlines do background checks?

Southwest Airlines will do background checks on their candidates. This can, of course, have a big impact on a former felon’s chances of getting hired.

However, each state does their background checks a little bit differently.

For example, if you live in one of these places, Southwest will only see things on your record that happened within the last seven years:

Perhaps even better, there are also some states that won’t look at not guilty verdicts. If you live in one of these states, Southwest will only see crimes that you were convicted of:

Unfortunately, though, there are also lots of states that look at everything. If you live in one of these states, the company will see everything, including things that you were found not guilty of:

We also spent a little bit of time looking at what it’s like to work at Southwest. To do this, we went to glassdoor.com to see what former and current employees had to say.

We found that the company has an impressive 4.3 out of 5 stars as their rating. The highest rating is 4.4 for culture and values. The lowest rating is 3.8 for work/life balance.

For instance, since they have many customer service positions, the company may be hesitant to hire people with violent or sexual offenses.

They also have jobs where you work with other people’s possessions (specifically baggage handlers), so they may not take kindly to theft convictions.

And since some positions may use heavy machinery, drug and alcohol charges could also be disqualifying.

Did our guide help you figure out how to get hired at Southwest Airlines? If you have experience with Southwest, we need to hear from you. The more you are able to tell us, the better we can make our article!