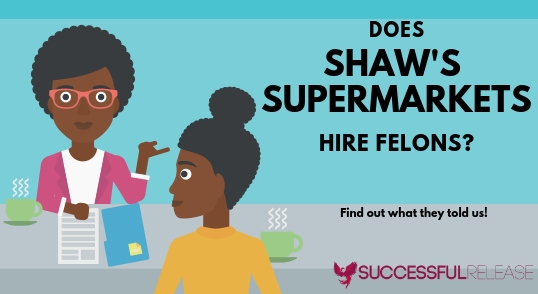 If a supermarket seems like a good fit for you, it’s a big time saver to know which ones will and won’t hire felons. We profiled Shaw’s Supermarket — a chain recently bought by the mega-grocer Albertsons — and found answers to the question, does Shaw’s hire felons?

We know it’s not easy out there to find a job after a felony conviction. That’s why we’re here to help. We believe everybody deserves a chance to make a better life. Our process is simple and effective. Relaunch Pad has a great deal of experience helping people with criminal records get jobs.

To do that, we contact every company directly for their response, and save you time by showing you the best way to apply.

This article aims to answer a few questions, such as:

We contacted Shaw’s parent company, Albertson’s, Inc., to ask them if they hire felons. They provided us with the following statement:

The statement is pretty self-explanatory. However, it’s good to know you’ll be looked at individually!

Shaw’s Supermarkets did not comment on if they have previously hired felons or not. We have had confirmation from other sources that Albertsons Inc. has indeed hired felons in the past, however.

Does Shaw’s hire people with misdemeanors?

The Ban the Box movement is an initiative by civil rights groups that aims to help those with criminal records get jobs by removing the check box on employment applications asking if you have any convictions.

Eleven states — California, Connecticut, Hawaii, Illinois, Massachusetts, Minnesota, New Jersey, Oregon, Rhode Island, Vermont, and Washington — have mandated the removal of conviction history questions from job applications for private employers. This is beneficial if you are applying for a job in one of these locations.

The Fair Chance Business Pledge was brought into the spotlight by the Obama Administration in 2016. It’s a call to action for companies in the private sector to eliminate barriers to offenders trying to re-enter society who need jobs.

In short, Shaw’s is not a part of the Ban the Box movement. Neither have they taken the Fair Chance Business Pledge. However, since they look at applicants on a case-by-case basis, don’t rule them out just yet.

Does Shaw’s have special programs for hiring felons?

The company did not tell us of any special programs for hiring felons. Our own research on this has concluded that they do not have any of these types of programs.

The odds are uncertain that Shaw’s Supermarkets will hire you if you have a felony. But, like we said before, they’ve been known to hire felons in the past. They also consider applicants on a case-by-case basis, so don’t give up on this company if you think you’d make a good fit and add value to the table.

What are some entry-level positions?

How to get hired at Shaw’s? If you focus on entry-level jobs, you are more likely to get a job at Shaw’s with a felony. There’s often room for growth, and you get to know the company better while being paid. At Shaw’s, entry-level positions are typically shift work-based and require very little education or experience.

Most store-level jobs look for people to help with stock (shelving and inventory, for example) or to run the cash register and work in customer service. There are tons of prep work positions, cleaning jobs and warehouse work, as well.

Check out their website for their most current job postings. You’ll notice some similarities between the jobs as you browse, so make some notes of what the positions need from you and launch into the next section . . .

How to get hired at Shaw’s with a felony

Start by reading our Ultimate Guide to Finding Jobs That Hire Felons. It lays out exactly what a former felon can do to maximize their chances of getting hired, despite a company’s policy.

Networking is probably the best method for getting hired at Shaw’s. Referrals and references are worth their weight in gold since hiring decisions are up to the store managers, with only guidelines laid out by the corporate office.

Some good tips to follow to get hired at Shaw’s with a felony:

Does Shaw’s do background checks?

Yes, it is a condition for employment, even if an offer has been made prior.

Some states don’t even consider information more than seven years old. This means that if your offense was six years ago, you’ll want until next year to apply. This is also great news for former felons living in these states! If your felony conviction was seven years ago, these states won’t even look at them in the check:

Even better, there are states that don’t consider court cases were you were found not guilty. Eight states are currently on this list:

However, there are still some states that will look at your whole record. This includes your not guilty verdicts. Be aware, if you live in one of these states, that they will see everything:

According to the ratings at glassdoor.com, Shaw’s received a 3 out of 5 star rating. Some of the reviews by former or current employees mentioned that Shaw’s was good to work for when it came to scheduling needs changing due to unforeseen circumstances. We know life happens, so appreciate when a company understands that, too.

While we know you can get a job here, some felonies will make it harder. Think about the job you’re applying to and your record . . . do you see any areas where they overlap? Avoid the overlap if you can by applying to a different position.

Don’t leave yourself open to being judged on paper alone without a chance to explain things in a better light.

Some accounts say yes, some say no. Be prepared, just in case.

Here’s your chance to help others who are you in your shoes. Did the information in this article help you get a job at Shaw’s with a felony?

Tell us the good, the bad and the ugly. Let’s help our community!

Jeni Gorsh is a Reentry Educator for The Relaunch Pad and has exemplified the American success story. She has not only overcome a significant birth injury, but also a chemical addiction that resulted in her loss of parental rights to her firstborn son and two stints in a women's prison to become a Registered Nurse, writer and proud mother of four boys.

17 Certain Ways of Finding Jobs for Felons in...