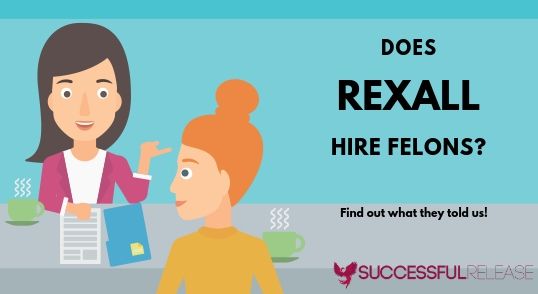 If you’ve ever thought about working at a retail drug store, then you may be wondering: Does Rexall hire felons? Rexall is a well-known chain of pharmacies owned by McKesson Corporation, a major health industries company. Today we want to look into this company for you and figure out if this could be a good place for you to work by answering the following vital questions:

We work hard to contact each company directly to bring you this information.

At Relaunch Pad, we work to gain your trust by practicing what we preach. We hire felons at our company because we believe in the idea of giving everyone a second chance at success. What better way to do that than bring you tips from those who have been in your shoes?

Now, let’s find out how to get a job at Rexall with a felony.

We gotten in touch with Rexall yet. When we do, we’ll put that information here. However, we’ve still done our research on Rexall by scouring job boards and postings on the Internet.

After browsing multiple job forums and discussion boards, it looks like you cannot get a job at Rexall with a felony. We saw many responses from people saying that they don’t hire felons.

However, we’ve also written about Rexall’s parent company, McKesson. We discovered that they might have hired felons in the past, so be sure to check that article out.

Does Rexall hire people with misdemeanors?

We couldn’t find any information during our research about whether or not they hire those with misdemeanors on their record.

What is the Ban the Box campaign and the Fair Chance Business Pledge?

Both are efforts that encourage employers to give those with a record a better chance for success in the job market. Ban the Box works to get employers to drop questions on their applications that ask about an applicant’s criminal history. Hundreds of private and government employers in the US and Canada have joined the movement.

The Pledge goes further and works to help those within an organization who have a criminal record advance through the ranks.

Rexall is not part of either campaign. However, they don’t ask about your criminal history on their application. We went and filled one out just to make sure!

Does Rexall have any special programs for hiring felons?

We didn’t find any information about Rexall having special programs for hiring felons, and it’s unlikely that they do. However, always check with your area’s unemployment office and job placement centers. They regularly help people with criminal records get a job.

We think that the chances are uncertain that a person will get hired at Rexall with a felony conviction.

We’re basing this off of a few factors. We don’t want to say there is no chance until we hear from them officially saying they don’t hire felons, of course. However, while their parent company seems to have hired felons in the past, we can’t confirm that Rexall has done so.

Most of what they hire for focuses on pharmacy and management work that requires college degrees. However, we know that this type of store will typically hire for positions like stockers, janitorial workers and cashiers as well so you can always consider those kinds of positions.

These jobs are going to be shift work. You can expect to work eight- to 10-hour shifts. Many stores are open 24 hours a day, so weekends or holidays are often fair game for scheduling.

How to get hired at Rexall with a felony

You should begin the hiring process at their online job portal and look for an open position you think you qualify for. The first thing they will ask is whether you want to upload a resume or type in all of the information as you go.

If you don’t have a resume, we want to help. We’ve created a guide to help you make a great resume.

First, we want to consider all of the work experience you obtained before prison. We don’t want to exclude any jobs you held in prison, either. Most of them required you to develop skills quickly, and those skills can be used on the outside. Consider the following common prison jobs:

What kind of skills are required for all of those jobs?

Once you start thinking about your experience like this, you’ll have no trouble filling out an application.

That’s just the first step, though. If you’re selected for an interview, you need to be ready. And guess what? First impressions matter. That means getting a new set of nice clothes. Don’t worry about the cost. You’ll be able to find places that have clothing for people in your situation. Check with your unemployment office, local Salvation Army or Goodwill.

On the day of your interview, make sure you have a fresh haircut. Put on deodorant and brush your teeth. If possible, cover any visible tattoos. Check yourself over in the mirror before you go.

While you’re at it, part of your interview prep should be practicing common interview questions. Record yourself and listen to your responses to some of these:

Does Rexall do background checks?

Background checks differ depending on where you live. The states listed below only show the last seven years of your criminal history:

Other states go back farther, but only care about charges where you were found guilty. That’s a good thing! Here’s a list of those states:

Then there are the states that want to see everything when they do a background check. This includes a list of all of your past criminal history. Those states include:

The website glassdoor.com tells us that Rexall has a 2.8 out of a possible 5-star rating and 44% of people say they would recommend working there to a friend.

Unfortunately, many of the respondents said that working at Rexall wasn’t great. They blamed terrible management for many of the woes. They also said that work/life balance was horrible and scheduling was disorganized. Many employees said there were long work hours and that the pay wasn’t that great.

However, there were also plenty of positive responses. Many people said they loved their coworkers. Many also mentioned the employee discount they received.

You may still be wondering: Does Rexall hire felons? We wish we could give a more concrete answer than ‘maybe’, but we can discuss some charges that may make your odds even worse:

If you’ve ever worked at Rexall, we would love to hear from you in the comments below. Our readers are looking for a second chance and would love to know how to get hired at Rexall with a felony!