Does Randstad Hire Felons in 2021? 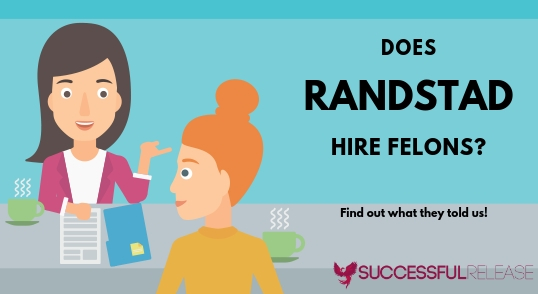 Randstad is a large staffing agency. They are quite literally in the business of employment — which is great for many people — but does Randstad hire felons?

Unfortunately, when you have a record, this is the sort of thing that you always have to wonder about. And there are others, too: Does Randstad hire people with misdemeanors? Does Randstad do background checks?

Trying to figure it all out can be nerve-racking and very frustrating. That is why our mission at Relaunch Pad is to give you the best information possible before you apply. To do this, we go directly to the source and ask companies about their hiring policies. We also research and draw on our own knowledge as people with records ourselves.

We’ve compiled everything we learned here in this article. So read on to learn more about Randstad and their hiring policies.

We haven’t been able to contact the company directly about this yet unfortunately. We’ll keep trying, of course. Until then, though, we have learned a little bit by doing independent research.

Has Randstad hired felons in the past?

Does Randstad hire felons? Based on what current and former employees have said online, it looks like they might — in some cases, at least.

That said, since they’re a staffing agency, their attitude towards your record may depend in part on the jobs they are trying to fill. Still, it does look like it’s possible to get a job at Randstad with a felony.

Does Randstad hire people with misdemeanors?

People with misdemeanors can also have a hard time finding work. Unfortunately we don’t have any official company hiring policy information when it comes to misdemeanors, either. However, since it looks like they might hire people with felonies, it’s likely that they will also hire candidates with misdemeanors.

The Ban the Box movement is a country-wide effort to help people with felonies find work by eliminating question about criminal records from job applications.

There is also the Fair Chance Business Pledge. With this Obama-era program, companies pledge not to discriminate in the hiring process.

Unfortunately, Randstad is not participating in either effort. This sounds kind of bad, but it’s actually not a big deal. Many companies that aren’t involved in either will still hire people with records.

Does Randstad have special programs for hiring felons?

Special programs for hiring former felons are fairly rare, but they are great when you can find them. Unfortunately, Randstad does not seem to have any.

This factor won’t hurt your odds of getting hired. It won’t help them, either.

Based on everything that we’ve learned about this company’s hiring habits, we can only say that your chances of getting a job are uncertain.

It’s not that things look terrible. In fact, the possibility that they’ve hired former felons in the past definitely works in your favor. Keep in mind, though, that the type of record you have might play a big part in this. More on that later.

However, until we hear from them personally for a direct statement on their company policy, it would be hard to estimate higher chances.

When profiling a company, we generally like to highlight some of their entry-level jobs. However, since this is a staffing agency, that doesn’t exactly apply. They staff for professional services and even some management positions, for the most part.

They do have lots and lots of entry-level jobs available, but they are subject to change on a constant basis. A quick look at their career page will give you an idea of what sort of positions they are trying to fill on any given day.

How to get hired at Randstad with a felony

Getting a job always starts with submitting a great resume.

This part of the process is always tricky, but it’s also extremely important. It’s always good to have a second pair of eyes look at your resume. You can ask a friend or, better, take it to an employment or career center to get a professional to check it over.

It’s always a good idea to put relevant experience in your application. However, since this is a staffing agency, that’s a little harder to do. In this case, it might just be best to highlight the skills you are most confident in.

For example, if you have worked in management or shipping, and feel like you know your way around a warehouse, you might put that at the forefront of your application. If you have a skill you think catches the eye, chances are they will be interested in hearing about it.

Along with a good application comes the interview. This part of the process is also dreaded, but it doesn’t have to be!

Though every interview is different, the outfit is usually  the same: Professional attire, and avoid displaying tattoos or piercings. Present yourself professionally, as well. Be polite, try to make eye contact and be mindful of your manners.

Remember: Since this is a staffing agency, the expectations they have for applicants are a little bit different. Randstad’s goal is to match you to a position at a company that they staff for. As a result, you want to come off as well-rounded.

Try to emphasize a variety of skills that you have accumulated throughout the entirety of your work history. Have you worked as a waiter? That’s customer service experience. Did you ever do any work in the kitchen? That’s also food prep experience.

Does Randstad do background checks?

It looks like they do background checks before finalizing their offers.

However, what shows up on their checks will depend on the state that you live in.

For example, there are many states that only check back seven years. If you live in any of these locations, you will benefit from that:

There are also some places that don’t look at not guilty verdicts. Here are those states:

Unfortunately though, there are also states that look at everything, including not-guilty verdicts. You should know these states are:

To find out what it’s like working at Randstad, we took to the internet. On glassdoor.com, we found that the company has a rating of 3.5 out of a potential 5 stars.

Some felonies will count against you more, depending on the job. Since there are lots of different types of jobs at Randstad, it’s hard to say for sure which convictions might make it harder to get hired there. However, we’ll give you our top suspects:

It looks like Randstad drug tests everyone before making their hires.

If you have any inside information about Randstad, we’d love to hear from you. Is it possible to get a job at Randstad with a felony? Tell us what you know so that we can keep our information as accurate and up-to-date as possible.