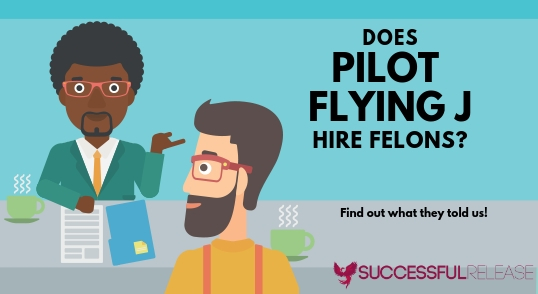 Pilot Flying J is a large fueling station company with locations on highways all around the United States. They have lots of positions available, but does Flying J hire felons? Knowing that Pilot and Flying J are merged companies, we’re going to answer this for both!

If you have a criminal record, this is the first question you ask yourself when thinking about applying for a job. And, of course, there are other important concerns as well, like does Pilot Flying J do background checks?

These questions aren’t always easy to answer, but we do what we can to supply the most accurate information possible. To do that, Relaunch Pad goes directly to the source to ask companies about their hiring policies for felons.

Information is key to success in the hiring process and we have plenty of it for you today! So, without further ado, read on for some information on Pilot Flying J’s hiring policies.

Unfortunately they haven’t told us. As always, we tried to contact the company directly, but have yet to hear back from them. We will continue trying them in the hopes of getting a response that will allow us to update this guide.

Until then, we did learn some things during our research. Based on experiences stated online by current and former employees, it looks like they don’t have any policies directly preventing them from hiring former felons.

This is good news, though it’s always best to have a statement from the company before getting your hopes up.

It’s not only former felons that have trouble finding work. If you have a criminal record of any sort, it might be held against you in the hiring process. So, does Pilot Flying J hire people with misdemeanors?

Assuming they have hired former felons in the past, it’s a safe bet they will also hire people with misdemeanors. That’s usually how things work . . . however, without hearing from the company, it’s hard to say for certain.

Has Pilot Flying J hired felons in the past?

According to what we’ve seen online, it looks like Pilot Flying J has hired former felons in the past. Granted, this is another thing that would be nice to hear from the company directly. Regardless, though, online evidence indicates it is possible to get a job at Pilot Flying J with a felony.

Is Pilot Flying J on the Ban the Box list?

The Ban the Box list is a country-wide movement to remove questions about criminal history from the application form. Basically, it aims to give former felons the opportunity to be seen for their present rather than their past.

There is also the Fair Chance Business Pledge. It’s a similar idea, but involves companies voluntarily promising to treat all applicants fairly in the hiring process.

Unfortunately, Pilot Flying J is not on either list. A problem? Not really. Many companies who will hire former felons are not associated with either movement. This does not mean Pilot Flying J will not hire people with a record.

Does Pilot Flying J have special programs for hiring felons?

Special programs for hiring felons are a rare but outstanding opportunity for applicants with a criminal record. These programs make it easier for you to get hired, but, unfortunately, they are fairly uncommon. Pilot Flying J does not currently seem to have any.

To review, we haven’t heard back from the company yet, so we don’t know their official hiring policy. We do know that it looks like they’ve hired former felons in the past, but they don’t participate in Ban the Box, nor do they have any special hiring programs.

With all these things in mind, it’s most accurate to say that your chances are uncertain. With a little bit of clarification from the company, we may be able to bump those odds up.

Now, let’s talk jobs. A look at their careers page will show a surprising array of jobs. There are lots of customer service positions since the locations are, at least in part, retail stores.

But there are also driving jobs, kitchen positions and maintenance jobs as well. One thing to keep in mind is that Pilot Flying J is a truck stop, so most locations maintain constant hours.

Many will be open 24/7/365 which means there are lots of different shifts throughout the week.

How to get hired at Pilot Flying J with a Felony

The process is more or less the same as it would be for any other job. It all starts by submitting a good application. Resume writing is a foreign art for most people, but there are a few ways to do it masterfully.

One of the best tips is to take advantage of proofreaders.

If you have a friend or family member who is good with resumes, let them take a look at yours. Otherwise, a career center would be willing to help you out.

Remember, most of the positions are in customer service, so if you have that kind of experience, it will help you get a job at Pilot Flying J with a felony. That could include anything from working as a clerk to being a waiter or waitress.

If everything goes well, you will then get an interview. For this part of the process, remember to show up looking professional wearing nice clothes, and no visible tattoos or piercings (if possible).

Many people feel nervous at this part of the process. Nerves are natural, but they also won’t do you much good in the interview. Try to relax beforehand, if you can. Listen to some music you really love. Take a nice relaxing drive. You can even do a practice interview with a friend or family member to help you prepare.

And one final tip? The follow-up call. After an interview, it can be a good idea to follow-up with the manager with a phone call. Simply thank them for their time, and ask them where they are in the hiring process.

Doing this once shows the store that you are serious about the job.

It looks like they do, especially for management positions.

For example, a few awesome states won’t look at anything further back than seven years. Here are those states:

There are also states that won’t look at anything you were found not guilty of. Here are those states:

Finally, there are also some states that look at everything. See them here:

We also did a little bit of research to find out about the company ratings for Pilot Flying J. To do this, we went to glassdoor.com. We found that they had 3 out of a potential 5 stars.

It’s always hard to say for sure which felonies will be held against you the most. However, there are some general issues to pay attention to.

For example, violent or sexual offenses will often keep you out of customer service jobs. And drug- or alcohol-related offenses might keep you out of jobs that involve operating a vehicle. Theft charges can also be weighed against you for cash handling jobs.

It looks like the company usually does not, but can at their own discretion. As always, it’s better to be safe than sorry!

24 Concrete Ways to Find Jobs for Felons in...

16 Certified Methods for Finding Jobs for Felons in...

18 Sure Methods of Finding Jobs for Felons in...