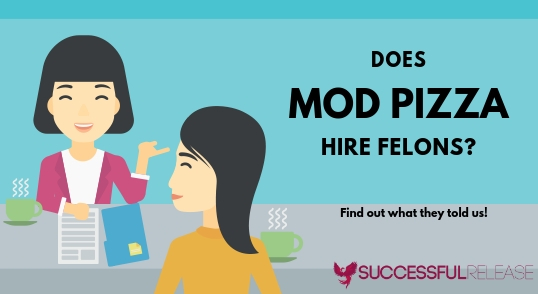 Job searching with a felony can be pretty stressful. Let’s take a bit of that stress away and answer the question: Does MOD Pizza hire felons?

If you are interested in working in the restaurant industry, MOD Pizza is a great option for employment. MOD Pizza is a top contender of artisan pizzas, sandwiches and salads, with locations in 20 states. They offer medical, dental and vision insurance, 401K plans, paid time off and an Employee Assistance Fund. And, they’re known to be felon-friendly! In this article, we will help you get a job at MOD Pizza with a felony. Together, we will look at the following questions:

Job searching is tough for anyone. Adding in a criminal background just makes it that much harder. Many of us here at Relaunch Pad have been in this same situation. Our team is mostly made up of former felons or professionals who have worked closely with felons, so we get it. That’s why we directly contact companies and ask them if they hire former felons.

We’re here to alleviate a bit of the stress of job hunting and to help felons get back to a normal life.

So, let’s find out how to get hired at MOD Pizza with a felony record.

Unfortunately, we were unable to reach someone at the company to ask them directly if they hire felons. We don’t give up easily, though, so we’ll continue trying to make contact.

However, there is no need to panic. We did some research to get you the answers. Throughout this article, you’ll see that MOD Pizza does hire felons.

Has MOD Pizza hired felons in the past?

MOD Pizza has hired felons in the past. According to a 2016 CNN article, the company prides themselves on giving those with prior convictions on their records a second chance. Many of these employees go on to become store managers or brand ambassadors.

While we have not been able to get in contact with a company representative to confirm or deny their hiring practices, our research shows that MOD Pizza will hire people with misdemeanors.

Is MOD Pizza on the Ban the Box list?

The Ban the Box Campaign was created in an effort to take that little box off applications. You know the one. The dreaded “check here if convicted of a misdemeanor or felony” box. Companies that have signed the Ban the Box list are committed to looking at an applicant’s previous work history, training and skills before conducting a background check. They literally “ban” the box — they don’t ask about criminal history on the application.

The Fair Chance Business Pledge is also part of this campaign. Launched by the White House during the Obama Administration, the Pledge is dedicated to giving former felons a second chance at living a productive life.

Our research does not show where MOD Pizza has committed to the Ban the Box Campaign or signed the Fair Chance Business Pledge, but they are willing to hire those with a conviction on their record anyway.

Does MOD Pizza have special programs for hiring felons?

MOD Pizza doesn’t have any special programs for hiring felons. What they do is look for prospective employees needing a fresh start. Those with disabilities, just coming out of foster care, and, yes, those with criminal backgrounds are the type of people MOD Pizza wants to hire.

Due to our extensive research, we think the odds of getting hired at MOD Pizza with a felony are high. According to multiple media sources, MOD Pizza is known for hiring those in need of a second chance to get back on their feet. Ally Svenson, co-owner of MOD Pizza, even describes her business as “enlightened capitalism.” They want the overlooked workers, including those with a prior convictions!

At MOD Pizza, there are plenty of options for entry-level jobs as part of the MOD Squad. The MOD Squad is made up of all MOD Pizza employees, regardless of position or time with the company. Your first foot in the door might happen as line cook, dishwasher or cashier.

An employee working as a line cook in a pizza restaurant setting typically makes the pizzas, sandwiches or salads per the customer’s order. Dishwashers wash any dishes that come into the kitchen from the dining area, as well as any dishes from the cooks. The cashier will greet customers, take orders and handle payments at the cash register.

These positions will give a new employee a starting point to begin moving up within the company.

How to get hired at MOD Pizza with a felony

The first thing to getting hired at MOD Pizza with a felony is to fill out an online application. If you find yourself struggling with your resume, Relaunch Pad can help with that as well. Our team has come up with a guide to help former felons create a great resume. Make sure, when filling out your application or resume, that correct grammar and punctuation are used. There are local employment agencies that will also help with resumes for those who just aren’t comfortable doing it on their own.

So, you filled out the application and a representative of MOD Pizza has contacted you for an interview. Great news! But what now? It’s time to prepare for the interview!

Does MOD Pizza do background checks?

MOD Pizza does not generally perform background checks, according to this article.

Co-founder and CEO Scott Svenson was quoted as saying they look for “attitude, aptitude and energy. We’re embracing this idea that your past, while it might describe you, it doesn’t need to define you.”

If you have a conviction that is seven years old, the following states won’t bother looking. However, if it was six years ago, consider waiting a year before applying.

The next eight states won’t even consider court cases where you were found not guilty:

Unfortunately, there are states that will see your whole record, including not guilty verdicts. Keep that in mind if you live in one of these states:

We did some online digging to find out MOD Pizza’s ratings. On glassdoor.com, MOD Pizza has a rating of 3.4 out of 5. There are quite a few positive reviews. Employees like the work environment and the ability to move up in the company.

Many of these were from “second chance” employees, or those with a criminal background. However, as with any company, there were also bad reviews.

Most of these were complaints about upper management either being too strict (or not strict enough) and policy changes.

Let’s get to the point, right? Does MOD Pizza hire felons? The short answer is yes. MOD Pizza is ready to give anyone a second chance that needs it and is willing to work.

However, a person with a theft conviction might have a hard time getting hired to run the cash register. Drug dealing charges might make it difficult to work in the back kitchen cooking or dishwashing if there is access to a back door.

We do not have any firsthand information on MOD Pizza drug testing. We suggest, however, to move forward as if they do. It’s better to be safe than sorry, right? That way there won’t be anything to worry about once you get that call for an interview and begin your employment with the company.

Did the information in this article help you get a job at MOD Pizza with a felony? Tell us about it. Your experience might help others in the same situation. We are in this together!