Does Intel Hire Felons in 2021? We Found Out 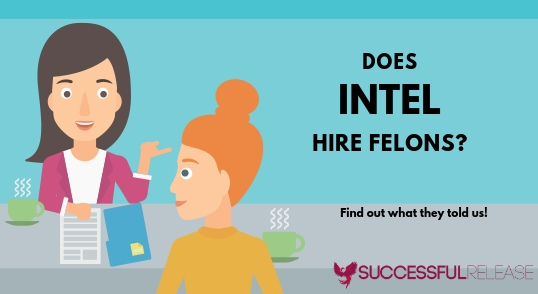 Intel is an innovative company that makes parts for well-known companies like Dell and Apple. With thousands of great jobs available, does Intel hire felons?

We know that former felons face special challenges in applying to a job, from applying to signing your final documents. For the best chance of getting hired at Intel, this article will provide all the tools you need.

Relaunch Pad reached out to Intel to find out their policy on hiring people with criminal backgrounds.

We also did a bunch of research on the company to give you a step up on the competition. Best of all, many of our writers are people who have either been incarcerated or have worked in prison re-entry programs, so you came to the right place!

We’re going to help you figure out:

So, let’s get see how to get hired at Intel with a felony on your record.

When they found out our goal of helping former felons get hired at Intel, here’s what they said:

Intel also conducts an individualized assessment by informing the applicant that he or she may be excluded due to a prior conviction, and considers additional, relevant information about the conviction as provided by the applicant, including, but not limited to: the circumstances surrounding the conviction, the number of offenses for which the applicant was convicted, the age of the applicant at the time the offense was committed, the length and consistency of employment or education since the conviction and other rehabilitation efforts.”

Clearly, this information can help you decide how and when to apply as a former felon at Intel. If you consider yourself a techie or just want to work for a tech company, then this might be the perfect fit for you.

Their statement sounds great, but are you still wondering, does Intel hire felons? According to the response we received, they don’t confirm or deny hiring people with felonies on their records. Instead, they informed us that they complete “individualized assessments” of each candidates, which include a candidate’s criminal history, past employment and even rehabilitation efforts made since incarceration.

Does Intel hire people with misdemeanors?

When we reached out, Intel’s representative didn’t say for sure one way or the other. However, they did say that they consider the severity and circumstances of the crime, so chances are Intel does hire people with misdemeanors.

They also have a web page dedicated to hiring policies related to criminal records, which also expresses that each candidate is looked at case-by-case.

The Ban the Box movement is a trend among companies that are committed to seeing a candidate as a whole, not focusing on their records in hiring. When companies join this list, they choose not to ask questions about past convictions in their application. Other programs like the Fair Chance Business Pledge push companies to further publicly commit to equal treatment. Initiatives like this help former felons get jobs, so we like to highlight them.

From what we can tell, they are not. But they also preach sustainability and other values on their website, so they share the concept.

Does Intel have special programs for hiring felons?

No, Intel doesn’t have these types of programs. Although some companies provide special mentoring or training for former felons, this company simply looks at each candidate individually and makes a decision.

We scored your odds of getting hired at Intel with a felony at uncertain. In other words, it could be better, but it could be worse when applying to Intel as a felon.

We know they look at your criminal history as one factor in hiring. However, we also know they consider each applicant individually.

Since they are a technology firm, their focus is likely to be on offenses involving software, especially computer hacking.

They also look at rehabilitation efforts and job stability over the years, which can give them a better perspective on who you are as a candidate. This company also looks individually at the severity and number of offenses, so you have a chance to explain your record.

Intel is a technology, software and information company that makes parts and provides services to some of the largest tech companies in the world. Their entry-level jobs range from sales representative to data security analyst, and everything in between. Some of the most common entry-level positions include:

How to get hired at Intel with a felony

First off, if you have any experience with computer coding, either in the classroom or at work, then you should start with that. Whether you are talking to a hiring manager or creating your resume, emphasize that you have these rare computing skills.

Whatever your experience level, you can reference the resume guide that Relaunch Pad has put together, which goes over tips and advice for applying to all types of jobs. Some of the best sections include writing a fantastic resume and talking about your offending history without damaging your chances further.

We suggest you do your research before applying to a specific job at Intel. Your application and interview need to be tailored to the job you are applying to. Use the keywords from the job posting frequently to show you’ve read and understand it, and are the qualified applicant.

If you really break it down, there are four main steps to improving your chances of getting hired at Intel with a criminal record. They are as follows:

First: Select the correct job for you. This includes honestly and accurately comparing and contrasting your professional experiences with the job.

Second: Do your research before the interview. They might want to see a professional portfolio or an example of your work — be ready!

Third: Shine at the interview. The formal interview, whether single or panel style, is still the key to getting hired at most major companies.

Fourth: Be honest about your criminal history, but don’t catastrophize it.

Does Intel do background checks?

When we reached out to Intel directly, they said individualized assessments are done that may “exclude [candidates] due to a prior conviction.” In other words, candidates’ criminal histories are part of the research they do when deciding whether to hire or not.

Since Intel is a large technology and software company, it’s normal that they need to understand exactly who they’re hiring. In addition to background checks, they also examine the number of offenses, age at the time and efforts you’ve made to better yourself since then.

It’s good to know there are states making positive action towards background checks. The following states understand you can grow from your mistakes, and look at nothing older than seven years on your record:

There are a handful of states that are only interested in your guilty convictions. These states won’t see anything you weren’t convicted of:

Regretfully, some states insist on looking at your entire record. These states will see every charge you’ve had:

Even though Indeed scored them a little higher than Glassdoor, both scores show fairly positive reviews. On the other side, there were complaints about bad management and workplace politics. This is pretty typical, though, so don’t get hung up on that.

Some convictions will make it harder to get hired at Intel. While the company has said they look at factors like age at time of offense, number of convictions and the rehabilitation efforts you’ve made, some of your history might work against you.

Convictions where some or all of the following were involved will hamper you:

Rehab and counseling efforts show employers that you have addressed this area in your life, though. Take a violence reduction program to account for violent crimes or join a support group to curb your impulses, for example. You can make the changes employers need to see!

In their official company policy, Intel makes it clear that they do drug test all of their employees. A drug test is required within 72 hours of their job offer, so be ready for them to drug test you at that point.

This policy means that every Intel position has the possibility of drug testing.

Have you applied to a job or worked here? Share your experiences!

If you’ve worked for Intel before, or even received a conditional offer of employment, your insights can help others tremendously!

If giving back to the community is important to you, then send us a message or leave a comment here.