Does Harley-Davidson Hire Felons in 2021? 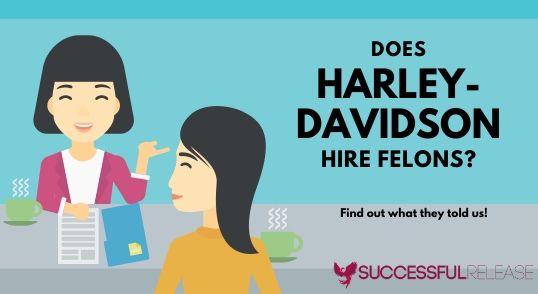 You’ve undoubtedly heard of Harley-Davidson, but have you ever thought about working there? In this article, we’re going to answer the question: Does Harley-Davidson hire felons?

If you’re interested in learning more about their “hogs”, this article will help you get a job at Harley-Davidson with a felony. We’ll answer these questions for you:

Finding work is no easy feat, especially for ex-offenders. That’s why Relaunch Pad directly contacts companies to ask them if they hire former felons. We also do tons of research so we can help you with your resume and interview. Are you wondering why you should listen to us? Because we are former felons ourselves and have been in your shoes!

Now, let’s take a look at how to get hired at Harley-Davidson with a record.

While this isn’t specific to criminal records, we also found the following:

So it looks like their policies don’t exclude former felons!

Has Harley-Davidson hired felons in the past?

We don’t have enough information to say for sure, unfortunately. We’ve seen some reports that they have, but nothing concrete.

Does Harley-Davidson hire people with misdemeanors?

We can’t say for sure if the company will hire people with misdemeanors. There just isn’t enough information.

Ban the Box is an initiative by All of Us or None to rid applications of the question asking if you’ve been convicted of a crime. The Fair Chance Business Pledge also helps former offenders and was started during the Obama Administration. It encourages employers to look past your background and focus on your skills and experience instead.

Unfortunately, Harley-Davidson doesn’t participate in either of these programs. Questions about your background pop up on some of the individual retail store applications.

Does Harley-Davidson have special programs for hiring felons?

They don’t have any programs aimed at hiring ex-offenders at this time.

After careful research and consideration, we give your odds of getting hired at Harley-Davidson with a felony as uncertain. They aren’t on the Ban the Box list, but some of their locations don’t ask about convictions on their application. Additionally, there aren’t any strong reports one way or the other about this.

If you’re interested in working hands-on with Harley-Davidson, you can find entry-level positions at their assembly plant where you’ll be manufacturing motorcycles — cool, right?

There are also entry-level positions in their retail stores. You’d be assisting customers with their purchases and handling transactions.

How to get hired at Harley-Davidson with a felony

While there are two types of entry-level jobs at Harley-Davidson, manufacturing and retail, the application process is the same for both. You’ll want to create an amazing resume that really stands out from the others and nail your interview. Here’s how you do that:

List your education. Did you graduate high school? Earn your G.E.D.? Maybe you attended college. Letting them know how far you went in school will give the company a good idea of your qualifications and abilities.

Be sure to include the names, addresses and phone numbers of your previous employers. Prioritize jobs with crossover skills to the one you’re applying for now. Don’t forget to list your job position and duties as well.

Detail any experience, skills or hobbies you have that will help you get a job here. For example, have you worked on a motorcycle? Do you have experience in a retail setting? Does your previous work history include any manufacturing or assembly experience?

Arrive 10-15 minutes early to show the company you can be on time and are reliable.

Wear something business casual. You don’t need a fancy suit or formal dress, but you don’t want to show up in jeans and a sweatshirt either. Men should try wearing khakis and a nice shirt while a dress or skirt and blouse will work for the ladies. If you don’t have something nice to wear, check out your local clothing pantry or church for options.

Talk about your talents and skills. They’ve read about them on your resume, but now is your chance to really talk them up. Whether you own a Harley-Davidson and taught yourself, worked in an assembly setting in prison or have work experience, make sure to tell them the details.

And talk about your favorite Harley-Davidson products! Show you know the company.

When you’re answering questions, be as honest and specific as you can. This includes questions about your background. You don’t want them finding out any of the details the hard way and costing you your job.

Does Harley-Davidson do background checks?

Online sources say Harley-Davidson will perform a background check sometime before an offer of employment is made.

Since background checks vary from state-to-state, it’s important that you know the laws where you live. Some states, like those on the following list, don’t look at anything seven years old or older:

And the states on this list aren’t concerned with any not guilty verdicts:

However, there are still some states on the list that will see everything, including the not guilty cases. Be aware in you live in these states:

We took to the internet to research Harley-Davidson’s ratings. Glassdoor.com gives them 3.5 stars out of 5. It seems to be that while the work environment is fun and relaxed, there are yearly layoffs and diminishing benefits.

Does Harley-Davidson hire felons? It looks like they do, but there are certain felonies that can hurt your chances.

For example, regardless of if you work in manufacturing or retail, you’ll be handling merchandise, so any crimes of theft will pose a problem.

Drug or alcohol charges will as well, especially if there are driving duties involved in your job.

Violent crime might also be a problem because you’ll have to handle high stress work environments from time-to-time.

Our sources say the company will perform a drug test as part of the hiring process.

Did you use this article to get a job at Harley-Davidson with a felony? Tell us about it. We want all the details! It’s also an opportunity for you to help someone else out that’s in your shoes. Let’s stick together.