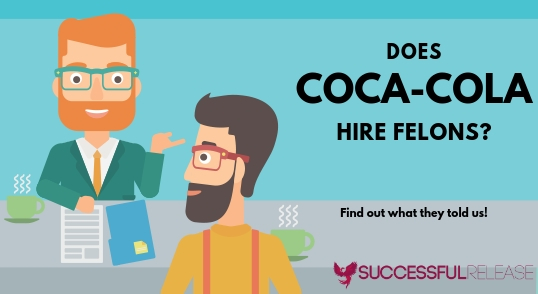 Coca-Cola is a historic company that has global name recognition, so you may be wondering: Does Coke hire felons? We’re going to dive into that question today because we know that this could be a great place to work and get your life re-established. We’re also going to dive into some other important questions you may have, like:

We asked Coca-Cola directly about their hiring policies and scoured other sources so we could bring you answers.

Relaunch Pad is dedicated to bringing you accurate information. We know how important it is to find stable work after a felony conviction. We want to make sure you get the best information possible. At Relaunch Pad, we strive to hire those with felony convictions and use their knowledge to help others find success.

Now, let’s talk about how to get a job at Coca-Cola with a felony.

We tried to ask Coca-Cola about their hiring policy for former felons, but were only able to reach their human resources help desk. They could not find any specific information regarding company policies for hiring those previously incarcerated.

They said that any policies regarding this issue were only for internal use, and therefore confidential.

We knew we needed better information to pass along to you, so we researched this issue further.

Does Coca-Cola hire people with misdemeanors?

Since there is evidence that Coke has hired people with felony convictions, it’s likely that they also hire those with misdemeanors on their records.

You may have heard of the Ban the Box campaign and the Fair Chance Business Pledge. Over the last decade, both of these movements have worked to help people with records gain employment.

Ban the Box focuses on getting employers to remove criminal history questions from their applications. The Pledge encourages employers to change their entire company culture to help those with convictions.

Coke does not ask about your criminal history on their employment application (we checked), though they are not officially part of Ban the Box.

Does Coca-Cola have any special programs for hiring felons?

Coca-Cola does not currently have any programs specific to helping felons. However, we encourage you to speak with your local unemployment center as well as job placement agencies in your area. These offices understand the challenges facing people with records and know which local companies hire them.

We think that the chances are average that a person will get a job at Coca-Cola with a felony conviction. The company doesn’t ask about criminal history on their application and we’ve found information supporting that they have hired felons in the past. However, without a direct answer, we don’t want to say the chances are high.

Coke’s job site is where you can find a listing of all jobs available. The good news is that many of the positions within Coke are available to those with or without a high school diploma or a GED. most of the jobs available will be warehouse jobs like material handlers, forklift operators and general laborers. You can expect 8-12 hour shifts with these jobs, likely working 40 or more hours a week. Some other positions include brewers and delivery drivers.

There are many other positions that only require a 2-year degree, including quality control technicians and store managers.

How to get hired at Coca-Cola with a felony

To get a job at Coke, you need to start the process online by browsing the jobs and finding at least one that you’re interested in. You then need to create an account through their online portal before you can apply. And just so you know, the first thing you’ll be asked is if you want to upload a resume.

If you don’t have a resume, we want to help. We’ve created a complete guide to making resumes tailored specifically to former felons. The guide will help you realize that you have more marketable skills than you previously thought!

You know any work you did before you went to prison can be included on your resume. Now consider any jobs you had while locked up, like:

Did you think that these prison jobs only helped you gain good time? They served many purposes and helped prepare you for real-world jobs. Think about the skills you learned in those jobs: Discipline, patience and the ability to follow orders, for example.

How about vocational or self-improvement classes you took while in prison? Certain ones may be appropriate for a resume. Many correctional facilities offer certificates and even degrees accredited by outside agencies.

Preparing for the interview means thinking about your skills and how to present them so you’ll get hired. It’s always a good idea to record yourself answering some basic interview questions:

With practice questions under your belt, you need to think about your appearance. First impressions matter, especially for job interviews. Therefore, you need to dress the part and look professional.

If your finances are tight, local job agencies or even the Salvation Army will help you look your best at low to no cost.

Get a haircut and shave. If you do have visible tattoos, cover them until you know the company policy.

Does Coca-Cola do background checks?

Yes, Coke does perform background checks on all prospective employees.

Not all background checks are equal. Depending on what state you are applying for a job in, your background check will only show convictions that go back seven years. You may want to hold off before applying if you are not quite at that seven year mark if you live in these states:

There are some states that only show convictions in which you were found guilty of. If you were found not guilty, it is left off of background checks done in these states:

Unfortunately, there are still many states that show all charges. This includes the ones you were found guilty of, as well as any charges in which you were not found guilty or which were thrown out. Here is a list of those states:

Coca-Cola has a 3.6 out of a possible 5-star rating and 79% of respondents approve of the CEO on the website glassdoor.com.

Hundreds of people praised the work/life balance at Coke and said they had excellent benefits. These benefits include vacation time, sick time and health coverage. Based on the reviews, many people say that the company respected them and treated them fairly.

Many people complained that the company is constantly changing and there are too many reorganizations. There were some complaints about long work hours and poor management.

You may still be wondering: Does Coca-Cola hire felons? We think there is an average chance they do, but we do want to talk about some convictions that may have a harder time getting hired.

Many positions involve driving, so anyone with a DUI conviction — whether a misdemeanor or felony — may struggle to get that job.

Coca-Cola partners with many schools and business. Anyone convicted of a sex crime or who is a registered sex offender may not be hired for jobs that involve direct contact with customers or clients.

Are you wondering about theft convictions? Coca-Cola doesn’t deal with high-end merchandise, so that may not be as big of a consideration as it would be for some companies. However, they want to make sure employees aren’t slipping product, so you might be given a closer look.

Our research indicates that Coke does drug test prospective employees.

If you’ve worked for Coca-Cola, then we’d love to hear from you. Comment below about your experiences. Any information you share about how to get hired at Coke would be greatly appreciated by our readers!